Will Schwinghammer and Jenna Simon 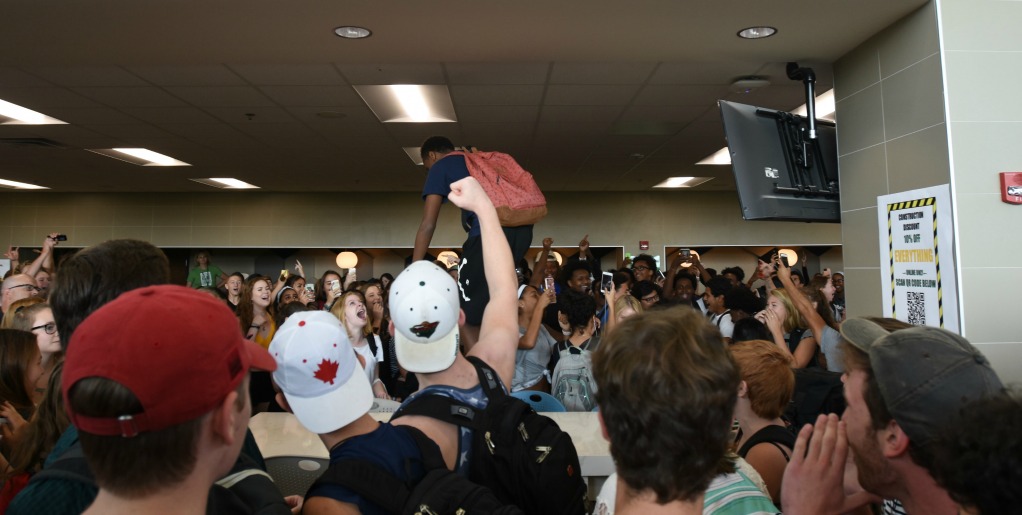 After a year of conflict, Edina High School students seem to have found a common cause behind which to rally. On Wednesday, September 13, a school wide protest was organized in response to what was perceived to be a stark and sudden change of the school’s implementation of its dress code. The protest was organized by students almost entirely through the use of social media, specifically on students’ Snapchat stories (outlets for images which disappear after 24 hours), and “Finstagrams” (private Instagram accounts where users can feel free to post whatever they want, only visible to close friends). What was the intended result of the protest, and how did it inspire students to so passionately express their opinions on the issue?

What started as indignation over the dress coding of two female students quickly escalated into a fervent student movement, and led to a deeper discussion and re-evaluation of district policy and the administration’s relationship with the student body.

Freshman Zoe Langsev was sitting at lunch on September 13 with a group of upperclassmen when she was approached by EHS Assistant Principal Jenn Carter. After Carter asked Langsev if she could speak with her for a minute, Langsev followed Carter to a quieter part of the Commons, where she was informed that her outfit violated the school’s dress code.

As it stands currently, Edina Public School’s Policy 504 on Student Dress defines inappropriate clothing as “clothing…that is sexually explicit or which conveys sexual innuendo or that may reasonable be construed as sexual.” Knowing this, Langsev’s initial reaction to being dress coded was confusion. “In my head I was like, I know the dress code, and [my outfit’s] not against it,” said Langsev.

Langsev was then given the options to either put on a t-shirt over her tank top, or call her parents. “I said call my parents,” said Langsev. “My mom knows I’m wearing this, and there’s nothing wrong with it.” After being given a couple of minutes to finish her lunch, Langsev followed Carter to her office to make the call.

After talking to Langsev’s mother, it was agreed that Langsev could wear a cardigan of Carter’s in order to cover her back. Before she returned to lunch, Carter asked Langsev if she had any questions, to which Langsev responded “Yeah, why is it okay to sexualize women like this?” Carter repeated that what Langsev was wearing was against the school’s dress code, and after some more discussion Langsev was allowed to return to lunch.

Langsev’s reaction to being dress coded was similar to the feelings of many teens who had been in similar situations. “I had this weird feeling, like, I just felt kind of violated,” said Langsev. “After I was done talking to [Carter], I go back to lunch and for some reason everyone knew what happened…the whole situation just made me uncomfortable.”

As news of the dress coding spread, many students took to social media to express their disappointment and outrage with how the district policy was being enforced. Suggestions for different forms of protest spread like wildfire, and eventually the general student population fell upon the decision to dress as “hoes” [sic] on September 14 in order to call out what they believed was the unnecessary censorship of students’ clothing. By evening, #EHShoeitup was trending. 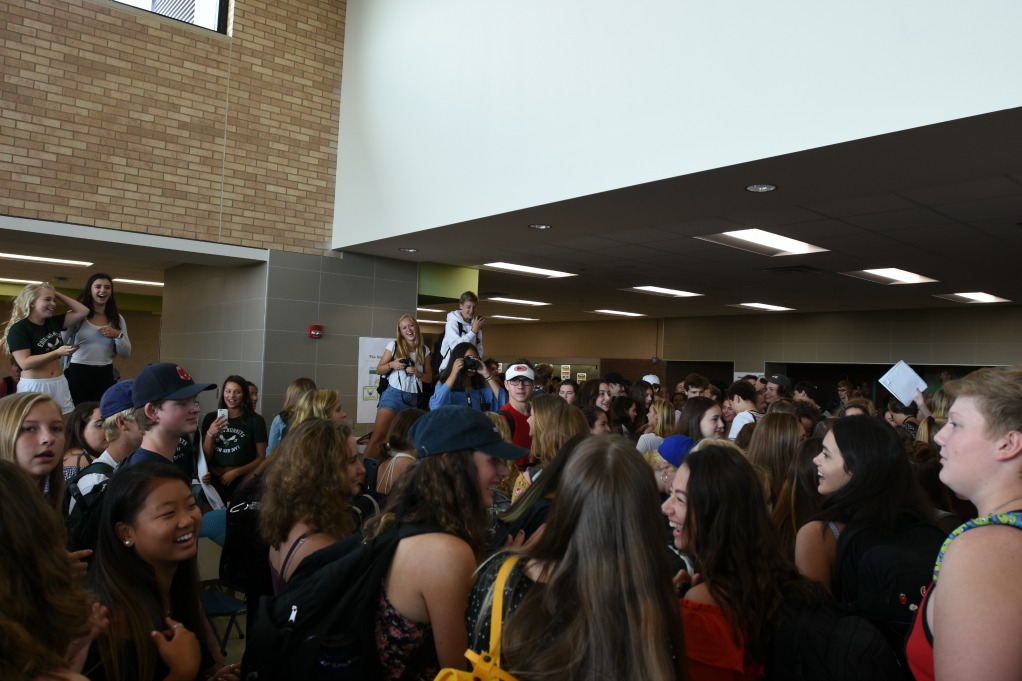 Students gathered in the Commons after second period for a protest

“Unfortunate.” That’s the word Principal Andy Beaton chose to describe the protests that took place on September 14. As school started at 8:30 AM, students trickled in, many dressed in their most revealing clothing (short shorts, crop tops, and shoulder-baring shirts), but others wearing red or pink to show their solidarity. Things went relatively smoothly until second hour ended, when advisory was scheduled to take place. Instead of heading to advisory, hundreds of students gathered in the Commons for what was meant to be a group photo.

The gathering was meant to be an opportunity to take a picture of students wearing their #EHShoeitup gear. “The protest to me was to raise a question of how do we look at the problem with the current enforcement of the dress code. In the cases I have heard of, the only students in question have been girls,” said senior Joe Hellickson, who participated by dressing up in overalls with nothing underneath. “I’m glad the students were all united in our cause, which was, of course, the belief that the administration was enforcing the dress code unfairly and arbitrarily,” said senior Annie Kratz, who went to the gathering in the Commons. However, the gathering “quickly spiraled into something it wasn’t intended to be,” said Assistant Principal Michael Pretasky. Students began standing on tables and chanting, and administration feared that the protest was becoming an unsafe situation for students.

As this gathering was taking place, Beaton was in a meeting he’d called with members of a student leadership organization called 212. Beaton clarified with the student leaders that nothing in the dress code had been changed, but by this point, it was already too late. Since he was already meeting with these student leaders, he was unable to deal with the protest happening at the same time, something he wishes he’d had the opportunity to do.

As the situation in the Commons escalated, the meaning of the gathering was lost. “I definitely feel like things got out of hand very quickly at the protest as the mob mentality took over,” said Kratz. While many students genuinely cared deeply about the issue, some others were agitators, simply along for the ride. “I don’t think [the protest] was very effective because it became more about being a rebel rather than doing something for a cause,” said Hellickson.

The protests escalated to such a level that the Star Tribune showed up to cover the incident. Soon afterward, Beaton sent out an email to the entire student body announcing an open student forum after school to help dispel rumors in the wake of the protests. 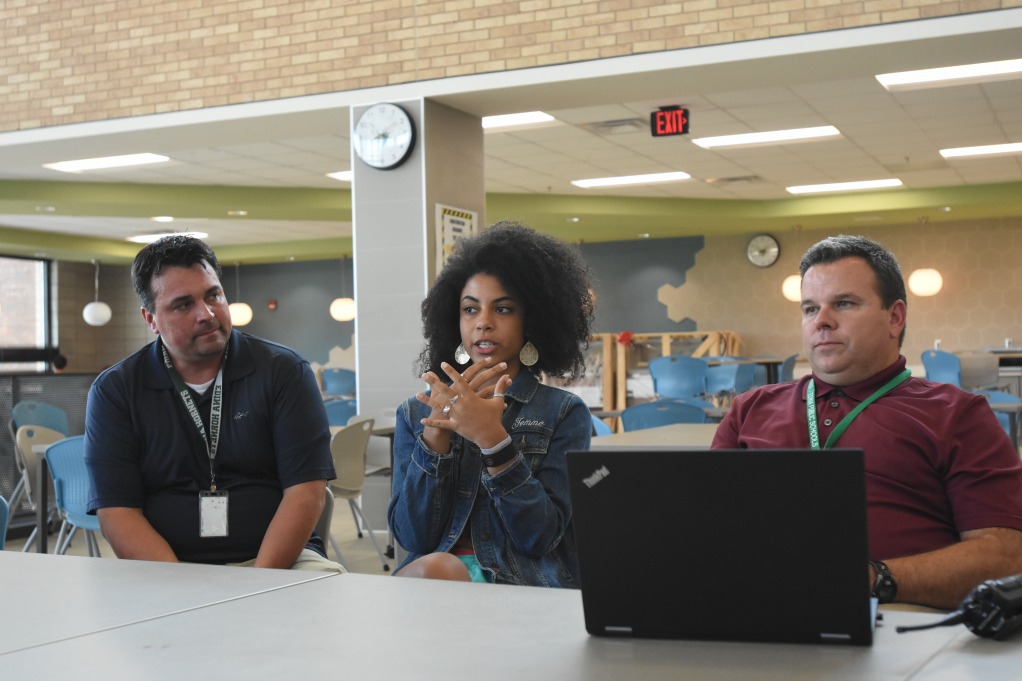 As the forum started, the room was on edge. Students wanted answers and administration wanted to mend the divide.  “This is not how I want to get to know the students of Edina High School,” said Beaton. One of the first issues on the table was the fact that, while he’d greeted freshmen and sophomores on the first day of school, upperclassmen had yet to meet their new principal. Beaton regarded this as a simple difference in leadership styles. Upperclassmen at EHS will remember that Dr. Bruce Locklear, the previous principal, often held assemblies in order to disseminate information throughout the school. Beaton prefers to be more hands-on. “I really don’t want to be wasting anyone’s time,” he said when asked about holding a class-meeting assembly. His style is to be out-and-about in his school, taking a direct and involved approach. In light of recent events, he may consider addressing the upperclassmen as a group.

Of course, the elephant in the room was the dress code policy. As the new principal of EHS, “dress code was not a big, high-priority issue for me,” said Beaton. To clarify, the new administration has made no attempts to alter any existing policies, and the dress code hasn’t changed since last year. The dress code is a district policy, and the Edina School Board is the organization in charge of altering it. The policy is now under review, and student involvement in constructing a new policy was brought up at the forum as a real possibility.

Despite that, students at the forum wanted to get to the bottom of what had transpired during the first week and a half of school. According to administration, there is no standing mandate for school faculty and staff to go out of their way to code students. Dress code issues are addressed for particularly egregious instances only. During the meeting, it was mentioned by various members of the administration team that they typically make a handful of dress-codes a year. Assistant Principal Johnson said that her codes are roughly split between boys and girls, and that all issues are handled as discreetly as possible. It’s never the intention of administration to purposefully embarrass a student for their outfit. Since the beginning of the school year, only two students have been dress-coded. Nobody was suspended or removed from class over a dress code issue. During the protests on September 14, Beaton instructed his staff to “let it go” instead of coding students who had intentionally violated the policy. Contrary to popular belief, the new administration is not making a crusade of the dress code. “My job is to support students,” said Beaton. “In general, I thought that students address dress appropriately here.” It’s possible that with the new administration already implementing many changes–some that had been designed before they took over–Beaton and his team were scapegoated. The dress coding of students at EHS is something that has happened in past years, and is not unique to the new administration. Many students were under the impression that the dress code had just been changed, when this wasn’t actually the case. “Students might be confused–what is changing and what isn’t?” said Kratz.

Regarding calls among students for a more specific dress code, administration was uneasy. The common viewpoint was that creating more rules creates a need to enforce them more strictly. The administration team, charged with running the school, is a busy group. “I don’t want to spend a lot of time enforcing dress code rules,” said Pretasky. However, when an issue does arise, administration wants to be able to deal with it effectively. “Are we not supposed to follow district policy? If something stands out as significant, I want to be able to feel like we can address it in a respectful way,” said Beaton.

Perhaps the most telling detail of the after-school forum was the attendance. Only twenty students or so were present, in the same spot where hundreds had rallied only hours before. The meeting began with the principal answering questions for students; as the forum went on, more and more members of the administration team joined the table. By the time the meeting ended, almost the entire team was present:Principal Beaton, Assistant Principals Carter, Johnson, and Pretasky, and Dean of Students Marshall. The only member missing was Activities Director Troy Stein. “Complaints always should go up,” said Beaton. He, and the other members of the administration team, welcome the advice and complaints of students. Johnson remarked that working with students can be one of the best parts of the job.

In general, the rapid spread of misinformation and students reacting before gathering all the facts led to two isolated incidents taking on a much larger meaning for many people. However, both sides have shown a willingness (and eagerness) to cooperate in order to find solutions. In times like these, it’s important to remember that students and staff share a common goal: helping kids. Despite some mean-spirited comments circulated about him on social media, Beaton is hoping to get back to helping Edina students quickly. Taking some hate–justified or not–is “part of the job,” said Beaton. In fact, it seemed that the regret most on the administration team wasn’t that things had escalated to such an extreme, but that there wasn’t a chance for them to clarify anything to their students beforehand. The way the demonstration in the commons had escalated “made the rest of the day yucky,” said Beaton.“Today was not a joy day,” said Beaton. “We gotta bring that back.”