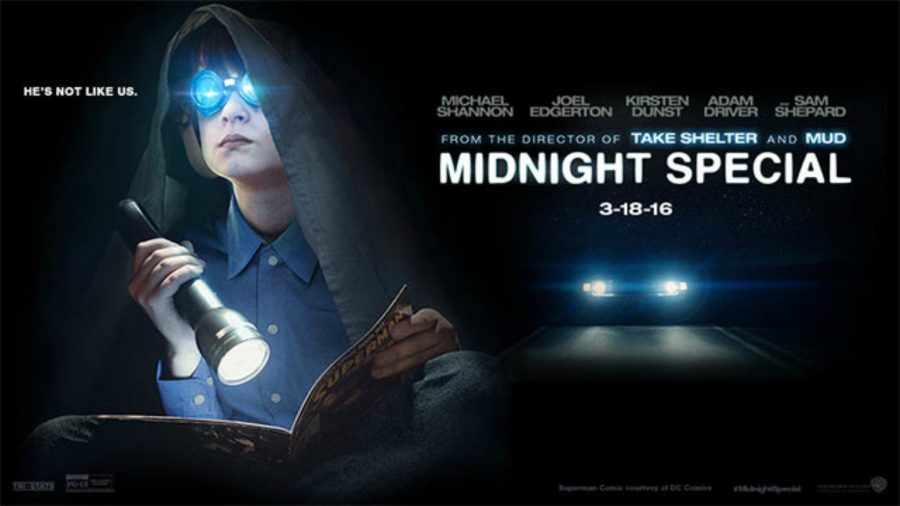 There’s a scene early on in Jeff Nichols’s new sci-fi drama Midnight Special where a police officer pulls over two of the main characters, Roy and Lucas, on a lonely Texas road. The police officer discovers that they’re the wanted abductors of a young boy, Alton, Roy’s son.  Lucas pulls a gun on the officer, but hesitates about shooting him, then Roy says something along the lines of, “Do it, Alton’s worth more.”

Lucas guns down the cop and, after sending out a call for medical assistance, leaves with the father and son. It’s left ambiguous as to whether the police officer lives or dies.

This scene encapsulates both what I love about Midnight Special and what I found deeply troubling about it. On one hand, it’s a sci fi film where the action actually means something besides CGI spectacle. Whenever a gun goes off, it means something important in terms of plot, theme, or character.

What disturbed me at first was what that particular gunshot meant about theme and character.

Let’s back up. Roy, Lucas, and Alton (and Sarah, Alton’s mother who later joins the world’s worst road trip) have all recently left a central Texan cult known only as The Ranch. Throughout his childhood, Alton displayed a variety of telekinetic and metaphysical powers, showing people visions and speaking in tongues. The cult leaders separated parents from child and studied Alton’s supernatural abilities. The film starts with Roy having recently kidnapped his son from The Ranch, on the run from cultists and government officials in a desperate sprint to some obscure location in rural Florida that Alton claims he needs to go to.

The film is, on the whole, well shot, well written, and well acted. The cinematography isn’t stunning or beautiful (it’s hard to make the seedy Texan motels and swampy Florida wasteland look particularly appealing) but it captures the desperate, gritty mood of the story very well. Dialogue is minimal, many characters are relatively simple, but what is presented builds an intense story.

But, returning to the scene I described earlier, what really bugged me was the motivation behind the main character’s actions. Roy might be a good guy for rescuing his son from a horde of fanatics, but shooting a man, probably killing him, all for his son’s protection (not even necessarily his life, there’s no reason to believe that the government would have hurt him) definitely seems like too much. And more blood is shed over his son’s safety before they make it to Florida. Sure, the supernatural powers make it a unique situation, but I like to think it would take more than a child of mine bursting into light every once in awhile for me to commit murder.

But that’s just it. I can’t understand because I’m not a father. I read several reviews of the film after seeing it, and quite a few critics noted that this was something of a litmus of a movie. People who have never been parents can’t understand why Roy and his partners go to such violent lengths to save a kid who barely ever says or does anything besides bring down government satellites and picking up Spanish radio stations. But parents understand that this is all part of the unconditional love and devotion that comes with parenthood, something we as high schoolers have only ever been on the receiving end of. Anyone would say that it’s troubling what Roy does over the course of the movie, but parents can sympathize with it because they actually do believe in that their child is “worth more” than a lot of things.

I recommend going to this movie (although that might be hard before too long. It didn’t do well in the box office and big releases are liable to push it out of theaters before too long) but instead of going alone or with a group of friends, go with your parents.