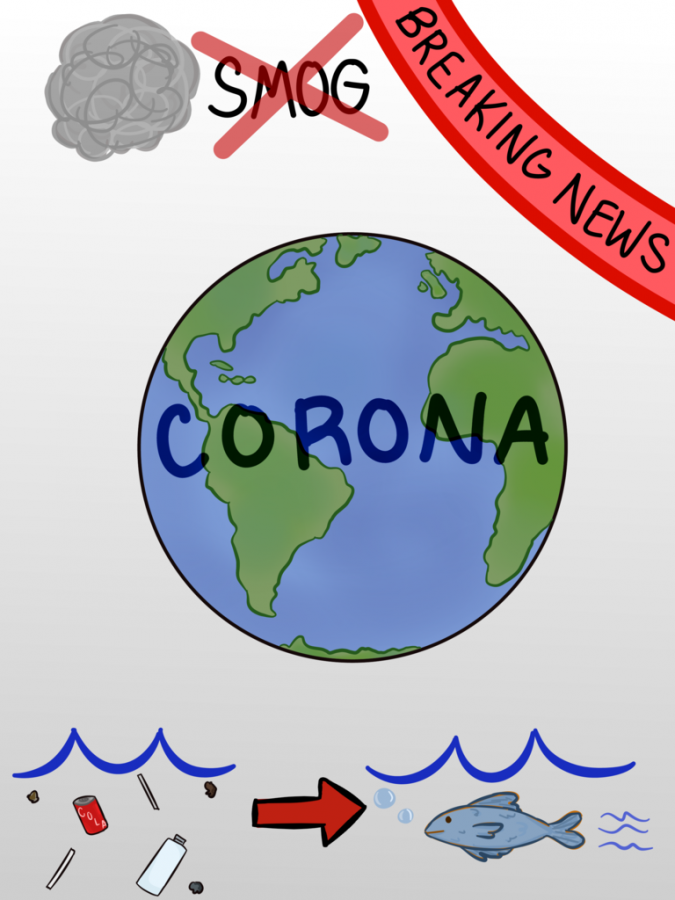 COVID-19 has caused destruction in the daily lives of Italian people but is now starting to create positive effects in our environment. As of now, COVID-19 has become a pandemic with no vaccine that has taken the lives of many with no stop in sight. While most people are quarantined inside away from nature, the environment has started to change positively from this pandemic.

In Italy, there has already been a notice in better air quality due to the lack of nitrogen dioxide emissions. This cleaner air is seen in the highly industrial areas of the country where most planes and vehicles would be. Not only is social distancing the reason that there is a lack of NO2 but this is also an effect of the recession. Many companies can’t support their use of pieces of machinery and vehicles that emit NO2. Minnesota has also seen this effect. Our reduction in NO2 has led to clearer blue skies and an increase in our air quality as well.

One of the most trending examples of COVID-19’s effect is the clear water in the Venice canals. With the lack of boat traffic, the sediments in the water haven’t been disturbed. This isn’t necessarily an improvement in the water quality but it is a new phenomenon for the people of Venice. Although the clear water doesn’t prove it, there is an improvement in water quality in some regions of Italy. Without tourism, the sewage discharge into the canals is decreasing leaving the water more purified than usual. So far in Minnesota, the land of ten-thousand lakes, we haven’t seen any changes in our water.

The Earth is visibly healing itself from damage during this period of social distancing. As this is only a belief, some think that this pandemic was a force of mother nature to heal her planet and as a punishment to us for harming it in the first place. After this pandemic, people will return to their usual habits, and we should keep in mind how the environment improved when people were inside. The goal would be to find a balance between our own luxuries and pleasures and the effect they have on our environment.

Always a bright side

While it’s easy to focus on the negative during this pandemic, there are many positive environmental changes that are happening globally because of the recent decrease in human activity. For instance, China, one of the first places to detect COVID-19, has experienced many of these changes.

Wuhan, China was a hotspot for COVID-19 in late January; however, China took matters into its own hands and declared a lockdown for 76 days, prohibiting people from leaving their houses. Eventually, on March 25th, the Chinese government ended the lockdown and began to resume trains, highways, and planes.

The switch to keep everyone inside was drastically different compared to the normally bustling and busy urban life in Wuhan. As a city known as the transportation capital of China, it’s naturally a busy place with constant commotion. Nevertheless, because of the vast amount of people, businesses, and factories in Wuhan, there is a heavy amount of air pollution.

However, during the 10-week lockdown, the environment was working its own magic. According to the National Aeronautics and Space Administration, the levels of nitrogen dioxide, a common pollutant that mainly comes from the burning of fossil fuels, went down by about 30%. These chemicals can cause major health problems such as asthma attacks, heart attacks, respiratory issues, and it causes about 1.1 million deaths per year in China. While many people are still stressed or sick because of COVID-19, the decrease in pollution has proved to be beneficial for the environment.

Additionally, the European Space Agency released a video that evidenced how air pollution vastly decreased in China as they were in lockdown. Marshall Burke, a professor from Stanford, announced that around 77,000 children and elderly from China were saved from air pollution for the duration of lockdown.

While less air pollution might be a small positive in the wake of the darkness of the pandemic, slowly but surely it will create long-term environmental changes that help people as well. It’s easy to be pessimistic about the current situation, but it’s important to know that there is always a bright side that can spark optimism, even during a global pandemic.