With summer just around the corner and school almost at a close, what better way to celebrate the beginning of grilling season than with these adorable cheeseburger cupcakes? These treats combine cupcakes, brownies, and buttercream frosting to create a dessert which will wow your whole family. You don’t even need to be a great baker (like me) to make them slightly resemble cheeseburgers! If you want to see some other baking fails, I’d recommend watching Netflix’s “Nailed It!” 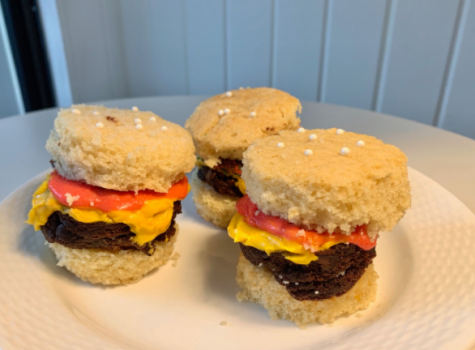 Ingredients: Exact measurements are not a necessity with this recipe, so feel free to be creative with your decorations!

-1 box of brownie mix (and other ingredients stated on the box). My favorite brownie mix is Ghirardelli Double Chocolate.

-Sweetened flaked coconut. (Or if you’re like me and don’t love coconut, you can just have a lettuce-free burger!)

-Buttercream frosting. If you don’t want to make frosting, you can buy tubs of premade frosting at the grocery store and save a few dishes from getting dirty!

Step 1) Prepare brownies according to the directions on the box mix. Let cool completely.

Step 2) Prepare white cake mix according to the directions on the box. Line muffin tin with cupcake liners, and fill each liner ⅔ of the way full with batter. Let cool completely.

Step 3) Remove cupcake from liner and cut in half horizontally, so you have the top and bottom remaining. Use a round cookie cutter to cut out the brownies to represent “hamburger patties.” Place the brownie on top of the bottom part of the cupcake.

Step 4) Prepare buttercream frosting. Separate the buttercream frosting evenly into 2 bowls. Use the yellow food coloring to dye the frosting to represent cheese. In the other bowl, mix the red food coloring to represent the bright red of the tomato. Even if you’re normally a hamburger person, I’d still recommend putting the cheese on as well so you get extra frosting!

Step 6) Mix the flaked coconut with the green food coloring until it is light green, like lettuce. Sprinkle the coconut on top of the “tomato” to add some more condiments to your “burger!” Since I’m not a huge fan of coconut, I skipped this step, which is why the “lettuce” is not shown in the photo.

Step 8) Enjoy your hard work and show off your cupcake/brownie/”cheeseburger” to your family and friends!