What’s a better way to spend $7 than a 3-pack of condoms?

Why it's important to learn about and practice safe sex 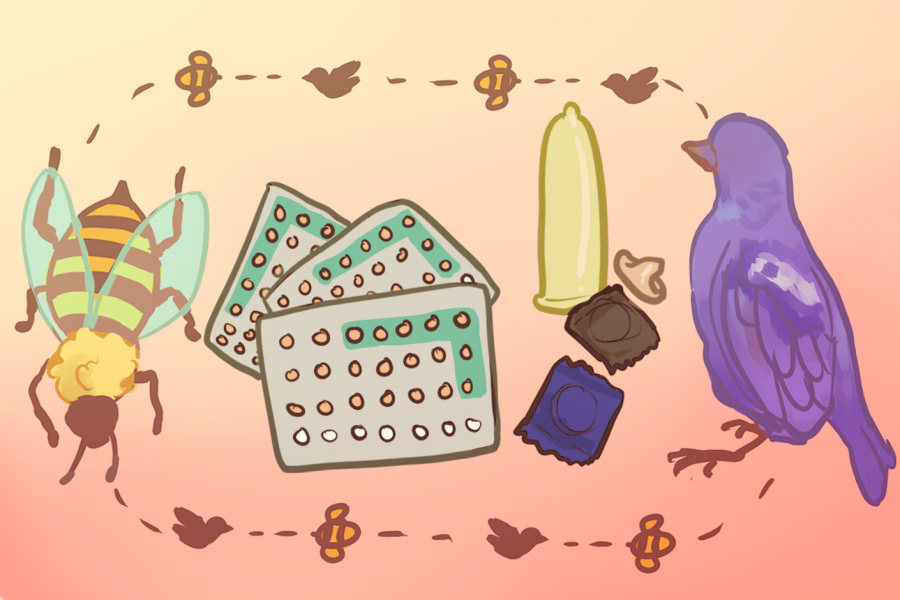 The topic of safety usually involves driving carefully, avoiding thrill-seeking activities, and wearing a bike helmet. Only rarely does it involve wearing a condom. Parents may educate their children about how to cross a busy road and why they shouldn’t skydive, they don’t always discuss how to have safe sex. And although Edina Public Schools provides its students with basic education on safe sex, the curriculum could be much more in depth and include the emotional repercussions of having sex. Since sex is a popular topic among high school students, it is important for them to be well prepared and avoid any possible consequences.
Safety
Two large concerns with having sex are avoiding unwanted pregnancy and preventing sexually transmitted infections; there are several precautions to take when planning to have sex so that these consequences can be avoided. Since sex can be an important aspect of a relationship, it’s equally important for sex to be safe. There are consequences and dangers to having unprotected sex: STIs can be a serious deterrent to health and, in extreme cases, even cause death.

While sex is traditionally associated with pregnancy, not all students want—or are able to support—a child at this point in time. Especially for female students, an unplanned pregnancy can forever alter the educational trajectory of a woman. So, if sex is something that a student wants to do, they should be prepared in order to avoid unwanted outcomes.

Additionally, LGBTQ+ students don’t usually receive the information they need to participate in safe sex—either from their parents or from health class. Therefore, they may end up looking at other, less reliable resources for help. When participating in vaginal, anal, or oral sex, condoms should be used. Female condoms, or “dental dams” are a great use of protection for oral sex performed on a woman. However, dental dams and flavored condoms should only be used during oral sex. Dental dams do not provide sufficient protection for vaginal or anal sex and the ingredients from flavored condoms can irritate mucous membranes and affect vaginal pH balance. To prevent STIs from spreading, change condoms when switching between different types of sex. Wearing a condom doesn’t guarantee protection from STIs; therefore, if you are engaging in sexual activity you should get tested for STIs monthly.
Protection Options
The most common prevention option is using a condom. It is highly effective at preventing STIs and pregnancy, so it’s an obvious choice for most. It is also easily attainable due to the fact that they are available in almost every gas station, convenience store, pharmacy, and grocery store across the US. Birth control is also a smart idea for protection against pregnancy but does not protect against STIs. Female contraceptives come in many forms, such as a pill, patch, injection, implant, and more. Organizations like Planned Parenthood and MyHealth, help make contraceptives more accessible than ever. These offices are available to help with birth control options, STI testing, pelvic exams, and pregnancy tests. According to MyHealth’s website, “If you are coming to our clinic for birth control, pregnancy testing, STI testing, and treatment, your parents do not need to be with you. This is required by the Minnesota state law, known as the Minor Consent Law.” This is a huge benefit for students who want to keep their sex life private from their parents, and without this protection, kids may decide to have sex unsafely.


Emotional Safety
Sex should always be consensual. If both partners are not enthusiastic about engaging in sexual activity, then you should take time to reevaluate your decision to have sex until both partners are ready. In order to practice sex that is emotionally safe, it is best not to begin sexual activity until you are sure that you are physically and emotionally ready. Teens are often not taught about consent, which is a large contributing factor to the high rates of sexual assault in the US. Consent can be revoked at any time, and nonconsensual sex can be reported to an official at any time, no matter how long it’s been since the assault.

The emotional aspect of safe sex is not as tangible as pregnancy and STIs but is equally as important. Sex can be a way to express affection towards a partner. It is important for individuals to feel safe with their partners. For some, sex can be a fun, casual activity, but emotional safety is important so that situations like blackmail, shaming, and developing insecurities can be avoided. Another large issue that can be caused by not being ready is that you can develop insecurities about yourself. “Men are by far most anxious about penis size. Men register more searches about the little guy than any other organ,” said journalist Michael Castleman, who has been covering the topic of sex for 36 years. “Women’s biggest concern is odor. Women worry that what’s between their legs smells like (in descending order): fish, vinegar, onions, ammonia, garlic, cheese, body odor, urine, bread, bleach, feces, sweat, metal, dirty feet, garbage, and rotten meat.” Since this is a popular concern among women, it could be at the forefront of many of students’ minds during sex.

There can be other insecurities during sex, and if your partner shows dissatisfaction, it can cause newer insecurities that can be hard to break. In all instances of sex, whether it’s a serious encounter or something light and fun, vulnerability always plays a part. It’s important to make sure that your partner is trustworthy and kind so that there isn’t judgment or blackmail later.
Social Impact
In today’s society, it is easy for women to be labeled in a derogatory manner simply for their decision to have or not to have sex. Depending on the culture or community, it is common for women to be labeled as a “slut” or a “prude” for their sexual decisions. The concept of having emotional security in your intimate life may seem unimportant, but its importance is evident in how society still seems to negatively label girls who have sex. In any sexual relationship, both female and male reputations can be misconstrued because of “locker room talk” or the like. It’s important to confirm that your partner won’t hold or spread judgments about you. Securing that your sex life is shared with only the people involved can be a very good thing.
Are you ready?
Sex can be scary. Although, many students feel pressured to have sex during high school based on the idea that “everyone is doing it,” it’s important to remember that sex should be consensual and take place whenever you’re ready.

One of the biggest debates when it comes to sex is the concept of “being ready.” If you’re too young, you’re making a bad decision. Too old? You waited too long. What exactly makes a person ready? Are the rules and regulations created by societal norms helpful or restricting?

There’s no right time or place to have sex. You’re not going to be “docked points on life” based on your decision to have sex or to wait. Students should not be shamed for their choices surrounding their sexual activity, as the time and manner of losing your virginity are entirely subjective and dependent on the people involved. If you’re ready to have sex, you shouldn’t feel like it’s a bad decision. This goes for guys and girls, as both male and female students are encouraged and pressured by their friends to engage in sexual activity. All teenagers are given “the talk,” but most of our so-called knowledge comes from movies, tv shows, and our friends. The media often skews sex, leaving out the inevitable awkwardness and the importance of connection, making sex seem meaningless.

If you are thinking about having sex, you should know your reasons for doing so, and make sure that you’re not just “doing it” to do it. “One of the biggest mistakes I see women making is having sex with someone new with the hopes that it will make him or her want to become more serious,” said Vanessa Marin, licensed, online sex psychotherapist. If you’re engaging or planning on engaging in sex, then you shouldn’t feel ashamed of your actions. Sex is an individual choice, and no matter your stance on it, remember it is critical that you’re comfortable making these decisions, and that you’re the one making them.