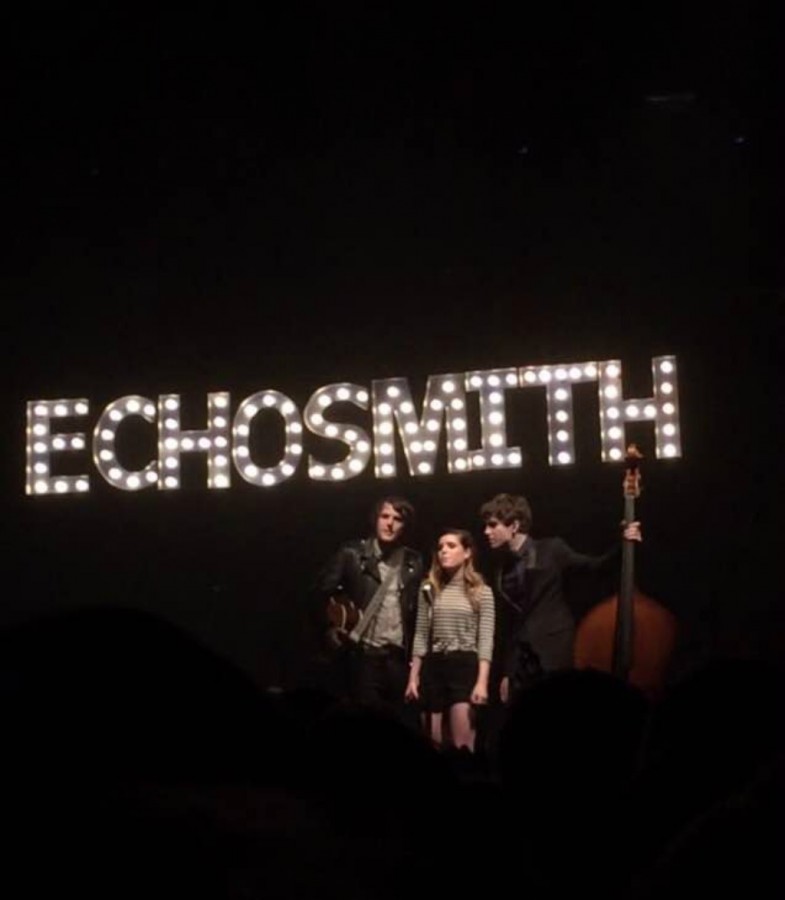 Last Thursday, Sophie and I drove forty minutes away to Myth Nightclub for a concert. We were going to see my all time favorite band: Twenty One Pilots. Twenty One Pilots is an Ohioan band consisting of two members: Josh Dun and Tyler Joseph. Their music is a mixture of punk, rock, hip-hop, and alternative, making it extremely unique.

Once we arrived, it was clear that this was a sold out show. The end of the line was out of sight as hundreds of fellow fans waited as well. It was also clear that most fans were die hard since some were covered in black paint or were rocking Josh’s red hair.

Finish Ticket, the first opening act, is a band from California and mostly plays indie pop/rock music. It was very upbeat and easy to dance to, which the entire crowd loved. They also announced that they’ll be coming back to MN for another concert on Mar 6, 2016.

Then,a giant sign with lights and the name “Echosmith” was lowered, informing the crowd that the other Californian band was up next. Echosmith delighted the crowd with fan favorites such as “Let’s Love,” “Cool Kids,” and “Bright.” The energy amongst the band members clearly affected the crowd, including myself as I danced and sang along.

Afterwards, Echosmith announced that they were going off stage and Twenty One Pilots would soon follow. The crowd went nuts. All of us agonizingly waited as the crew took down the Echosmith sign and put up a TØP sign instead. I eagerly waited as I saw Josh’s drum set and Tyler’s piano being rolled on stage, wondering when they would finally come on stage.

Suddenly, the venue went dark and the dynamic duo started off strong with “Heavydirtysoul,” and the entire crowd pushed around hoping to get a bit closer.

Out of the ten or so concerts I have attended, this one was by far the best. One reason is that the band interacted with the audience a lot. Tyler would have us sing or do certain actions. At one point, he said “Find a partner next to you, and when I count to three…Climb onto their shoulders.” So after his count, the entire audience was filled with people on each other’s shoulders, singing along. At another point, Tyler pointed out to a man in the crowd and told him to get out. Everyone was confused, but he said “Everyone, security, help get that man out. He can’t be pushing girls over here.”

Secondly, the audience had so much energy to give back to the duo. We all sang happily, complied with Tyler’s requests, and reveled in the music.

Three, the energy of Twenty One Pilots was unlike any other I have seen. The stunts they did and the music setlist had the entire venue going wild. Josh did a backflip from the top of the piano and Tyler climbed on a very tall ledge in the middle of the audience. I also really loved the setlist because they managed to fit many songs from all three albums, mostly due to fact they played a melody of about seven of the songs during the middle while Tyler played the ukulele.

I have repeatedly heard that Twenty One Pilots put on amazing shows, but I was blown away last Thursday.