Trump’s impact on the global arena 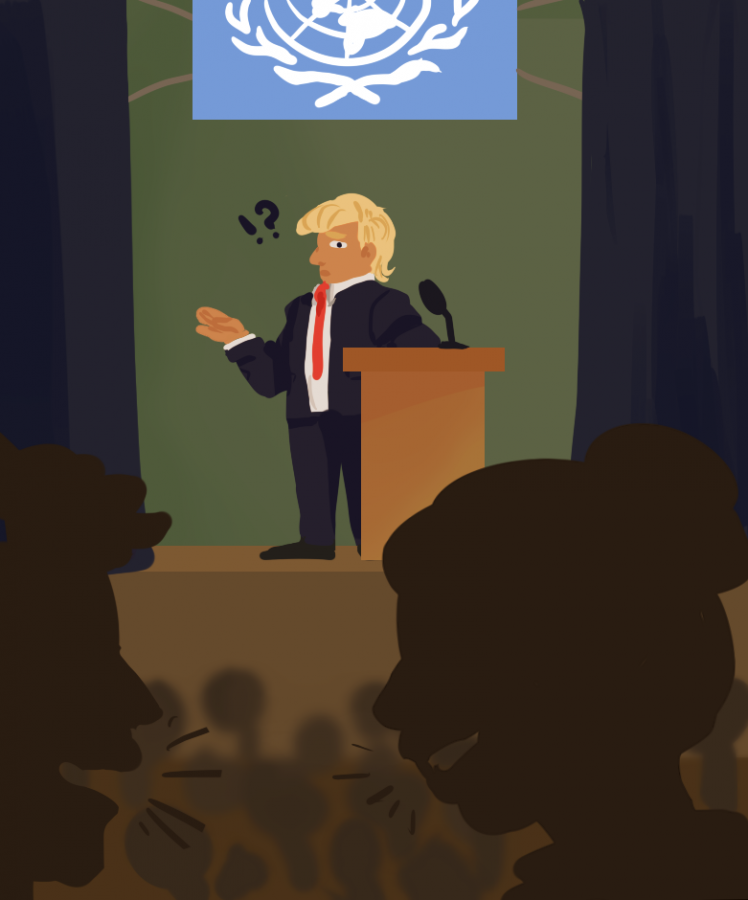 Throughout the Trump presidency, Americans have been sitting on the edge of their seats waiting for the next damning news to emerge about the President. Whether it be Twitter threats, unpredictable policies like family separation, or completely predictable executive orders like the travel ban, Trump’s troubling practices haven’t gone unnoticed by other national leaders, nor have they been a good thing for US foreign policy. The lack of effective executive leadership and diplomatic relations have taken a serious toll on the US’s leadership position on the global arena.

The evidence of failing leadership was made very clear at a United Nations conference on Sept. 25. “In less than two years, my administration has accomplished more than almost any administration in the history of our country,” Trump said. This statement was followed by a round of laughter from the other leaders, taking Trump by surprise, “I didn’t expect that reaction, but that’s okay.” This scene at the United Nations lends itself precisely to what the US resembles under the Trump administration, a joke.

One of the most lasting effects of the Trump administration is completely demolishing any soft power the US had in its arsenal. During the beginning of the administration, it was clear through his brash comments about women and immigrants, Trump did not, and still does not, care about being seen as a country that promotes diversity and human rights. One of the most notable moments in the first year of the Trump presidency was the withdrawal from the Paris Climate agreement which set a very clear precedent. Along with Trump, Vice President Pence’s adamant denial of the existence of climate change has struck down US efforts to aid in prevention of environmental destruction. Trump would not invest in efforts that aimed to create a better world, but only deals that benefited the US economically and globally. Despite this logic, however, the significant loss of soft power that has occurred has diminished the US’s reputation, both foreign and domestically.

Trump’s rhetoric specifically about immigrants has made a global reputation of America that is filled with xenophobia and exclusion of those who are not deemed the ideal American citizen. Calling them “sh*thole” countries, Trump was discarded by many of these countries he referred to directly and indirectly as an authoritarian president only interested in pushing other nations down. “Domestic or foreign policies that appear hypocritical, arrogant, indifferent to others’ views, or based on a narrow conception of national interests can undermine soft power,” Harvard Professor Joseph Nye said.

These logics carry through all of Trump’s policies and through his clear violations of human rights. Most recently, the horrific epidemic in the US of detention centers being at the highest levels in history, Immigration and Customs Enforcement Officers deporting immigrants and separating families, all with Trump’s discretion. The list of atrocities that Trump has committed against immigrants goes on and on. The only immigration that Trump has actively supported is increasing the cap of high skilled immigrants which only further established the US as an authoritarian power only searching for economic growth and being a neoliberal hegemony.

Trump’s utter lack of censorship in foreign affairs is another factor that has established the US and Trump as a joke. Among the disgraceful moments, the US-Russia summit in Helsinki stands out as a version of Trump that emulates the worst America has to offer. Defensive, ignorant, unprepared, and disinterested qualities are what he projected through his actions that day. The interactions between Trump and Putin was one that put the US in a position of great vulnerability as it gave way to critical American security, a reemergence of cold war tensions, and a dangerous miscalculation of Russian power. This critical point demonstrated a serious error in Trump’s approach to foreign policy on which he has not changed.

Most recently, on the domestic front, Trump’s vulgar comments about women pertaining to the Brett Kavanaugh hearings have further signaled his failure to support the most basic human rights. This has unforeseen consequences for our ability to be an international human rights leader and promote policies that hold other nations to a higher standard particularly in regards to how we as a country, and a world should be treating women.

Trumps irrational policy in conducting himself on the world order have had devastating repercussions for the US’s position in the global arena. The loss of soft power downgrades the US in being able to demonstrate our capabilities in fostering a more democratic nation as well shifts the focus of our objectives to something to be laughed at. If Trump hopes to have any ability to shape the world order he needs to re-evaluate his economic-focused agenda and revert his human rights effort.