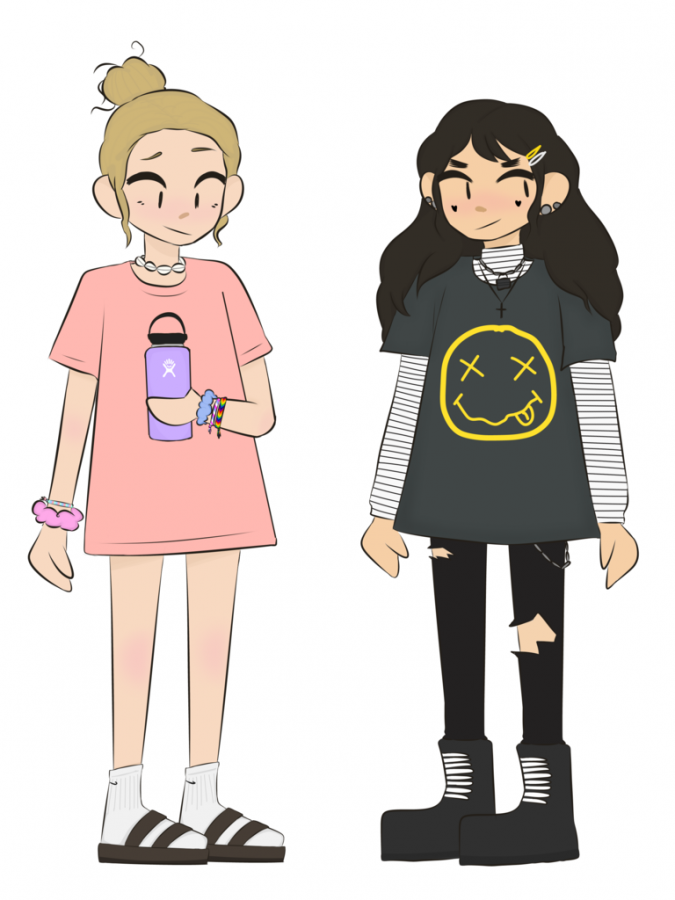 Hydroflasks are taking over, and wherever you look, you’ll undoubtedly see scrunchies dominating the wrists of half the population of Edina students. The other half is likely wearing striped shirts under graphic tees, with the sound of heavy Doc Martens hitting the pavement. These aesthetics have been labeled as “VSCO girl” and “e-boy/girl.”

If you’ve been living under a rock, Urban Dictionary has defined a “VSCO girl” as a girl who “wears oversized t-shirts or sweatshirt[s] with Nike shorts. Has Vans, Crocs, Birks, and wears a shell necklace. She also wears tube tops and jean shorts. She always has a Hydroflask. She can’t leave home without a scrunchie and her favorite car is a Jeep.”

An e-girl, however, is “emo usually found on TikTok but commonly spends time on Tumblr. Can be found wearing pink eyeshadow with a large wing, little hearts under the eyes and a blushed nose,” according to Urban Dictionary. The Youtube star that initially exposed young highschoolers to these styles has become a household name: Emma Chamberlain.

E-girls and VSCO girls have both received backlash for expressing themselves. E-girls have not only been shamed for their TikTok skills, but they’ve also been berated by their own people. “I can’t believe how some people can be such fakes … like I literally can’t trust anyone in this toxic environment,” freshman Lucy Owens said when asked how she feels about her fellow e-girls.

One VSCO girl at Edina, senior Hannah Taylor, views her label positively. “My goal is just to spread positivity. I really just like spending time with my best friends and save the turtles, sksksksk,” Taylor said.

Taylor also elaborated on how she feels attacked as a VSCO girl, “The worst thing ever has to be when I’m opening my Hydroflask—hydrate or dydrate!—and everyone starts looking at me!” These actions have led some girls at night to stay up and wonder: “What would Emma Chamberlain do?”