Speech and Debate: a serious commitment many consider 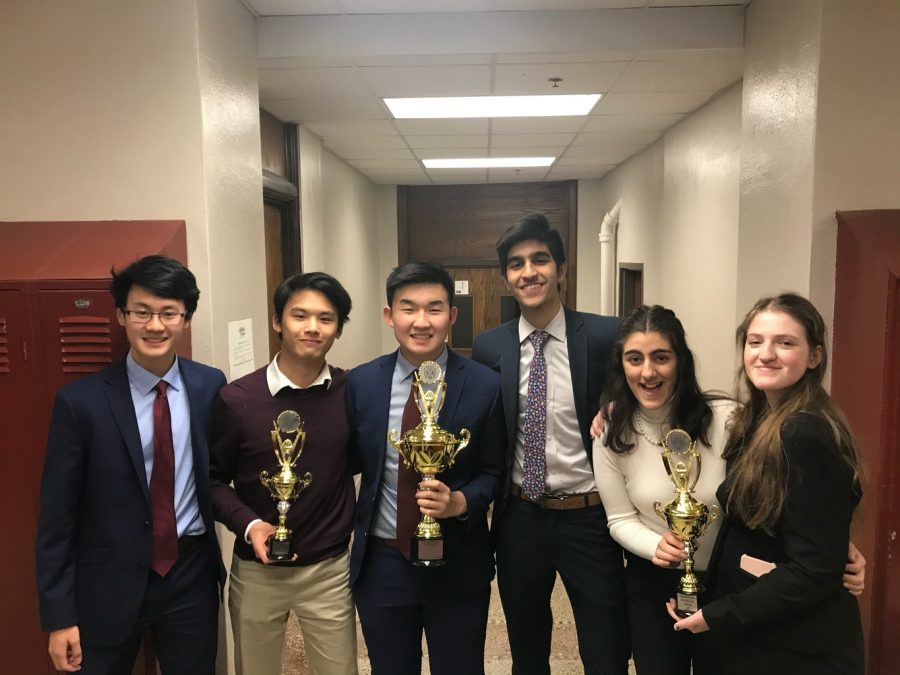 Edina High School is home to nationally-successful speech and debate teams with many of the same students comprising the different teams. However, the differences and similarities between the two are a mystery to students not involved with the teams.

The two extracurricular seasons are separated, which provides students the opportunity to participate in both. “I think in general kids like to do both. Minnesota rules allow the different seasons. In other states the seasons overlap,” debater and junior Ryan Zhu said.

Even though debate and speech are two different activities, they share many fundamental aspects. Debate is often categorized as an extracurricular where students are given topics to present different supporting or refuting arguments. Specifically, there are four different forms of debate and 13 forms of speech. Often times, this involves giving speeches about your topic which links the debate and speech teams together. “The research and writing for debate does not happen in speech, but the speaking style is in both,” Zhu said. This drives some students to participate in both to expand on public speaking skills and confidence needed to be successful in each. In fact, a form of speech known as extemporaneous speech is similar to the research and argumentative concepts present in debate. Many of the students that participate in both extracurriculars commonly go on to extemporaneous speech as it is most common to debate. “I would say that if you do extemporaneous and debate they do help develop skills required for each other,” Zhu said.

As a student who does both congress debate and information, program of oral interpretation and duo speech, junior Aditya Rewalliwar has an in-depth perspective on how the two teams relate. While debate revolves around research and argumentation, speech involves preparing and giving speeches effectively. “Debate is a lot of argumentation and trying to respond to arguments. In [some forms of] speech, you just give your speech, and you are done,” Rewalliwar said. Speech participants must formulate an effective speech and present with a high level of persuasiveness that engages audiences. While these public speaking skills are a large part of debate, other goals and skills are needed in addition to being a good speaker. Furthermore, speech is unique in their potential for creativity in humorous, dramatic, poetic, informational, and many other forms that require students to expand on simply speaking and include interesting and unique content that engages audience members.

Some choose to participate in both starting in middle school and continue with the commitments throughout high school due to the time they have already invested in the teams. Regardless of when students join, many are introduced to speech through debate because the speech season occurs after the debate season and convincing the current debaters is a common recruitment tactic for the speech team to gather new members. “My parents dragged me to a meeting [in eighth grade] for debate, and I became so enticed by all the amazing things I have learned, and I thought speech would provide me with the same opportunity, so I joined speech,” Rewalliwar said.

For some, there is simply a lack of interest in one that prompts them to only commit to one of the extracurriculars. “[Some students] enjoy the speaking part of debate the most and transfer that to speech, where as I enjoy the entirety of [public forum] debate, and speech did not offer it,” Zhu said. However, biases do arise in that there are multiple forms of debate and speech that each present different environments and overall experiences. And while the two do link together and foster a similar skill set, the two are not required to be the best at one respectively. “I think that it helps them a little bit, but I do not think a student’s overall success is defined by if they do both activities,” Zhu said.

An often overlooked aspect of both activities is their rigorous workload and commitment that is needed for the many weekend-long tournaments around the metro area and country. Because of this time commitment, doing both can be unhealthy and unmanageable for some students. “I think the reason a lot of kids choose to do just one is because debate is definitely more intensive,” junior Nihar Atri said. As a student who does Policy Debate and used to participate in Extemporaneous Speech, Atri acknowledges the commitment required and the potential negative effects on one’s mental and emotional health that can result from participating on both teams. The competitiveness and overall expectations for students on speech and debate creates a highly stressful environment “You are in it to win it, so you spend all your time researching. That’s definitely something that can have negative effects,” Atri said. For students who participate in debate, the extracurricular activity is just as strenuous to the mind as a varsity sport would be to an athlete’s body. Overtime, this creates a build up of stress that encourages students to change their time commitments and quit either debate or speech. Some students may not experience trouble balancing the commitments of both speech and debate, but find their academic performance slipping because of the time-commitment in doing both.

Students participating in debate and speech have a unique challenge in balancing their school and home lives as a result of their expectations. This can bring out the best in some students or create an overwhelming environment for others. Regardless of how the two manifest for different students, the extracurriculars are valuable ways for students to explore their interests and develop valuable skills needed for the real-world.