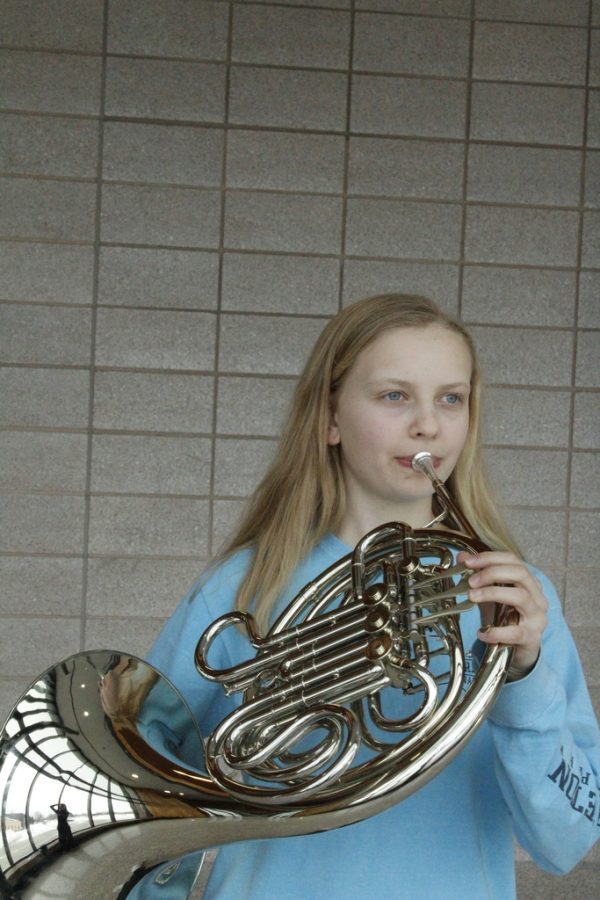 French horn extraordinaire sophomore Katy Meffert has been playing the instrument since the fifth grade. Right now, she plays in the Brass Choir and Varsity Band at EHS, and she frequently subs in for players in the Concert Band. She’s also a member of Symphony, the premier orchestra of the Greater Twin Cities Youth Symphonies (GTCYS). In Symphony, she is third chair french horn.

Meffert’s musical history started with the violin when she was four years old. She made the permanent switch to French horn when she entered middle school. Her grandfather, a band director, taught her first horn lessons, although she now has a private teacher. She has no regrets for switching to french horn. “I like playing the horn specifically because of the sound, and it’s just so pretty,” Meffert said.

Right now, Meffert is working on a solo piece by composer Richard Strauss—Concerto for French Horn and Orchestra No. 1. The piece is nearly twenty minutes long, and it’s part of her preparation for college auditions. “It’s just the best. It’s so big and the beginning is like, it’s not a cadenza, but it’s cadenza-y. The whole thing, it’s just so show-offy for horn,” Meffert said.

Sophomore Libby Heitzmann is a fellow member of the EHS band program and is one of Meffert’s good friends.“She is very focused . . . she puts a lot of effort into what she does,” Heitzmann said. “I really admire her outlook towards everything: she’s a very positive person.”

Meffert practices 45 minutes to an hour a day. During her practice sessions, she warms up, does etudes (which are shorter pieces focused on technique) and then moves onto her solo pieces. Like anyone else, there are times when she suffers from a lack of motivation or insecurity about her playing, but she pushes through because, ultimately, music is what she wants to do. “You can express yourself in such a cool way, and it’s just, I don’t know, the culture of music is so cool and the history of a piece is just so cool,” Meffert said.

The first year she auditioned for GTCYS, which was for the last season, Meffert was placed in the highest orchestra: Symphony. In Symphony she plays a handful soloistic passages in a variety of ensemble pieces, including Tchaikovsky’s Symphony No. 6. “A piece like Tchaikovsky or something like that, I listen to it over and over again; it’s my favorite symphony. Being able to play that so well, I get goosebumps,” Meffert said.

Outside of music, Meffert plays basketball and ultimate frisbee, but music is her top priority. Even now, she’s already starting to prepare for college auditions. She plans to continue in college and outside of college as well, and she hopes to turn french horn into a career.