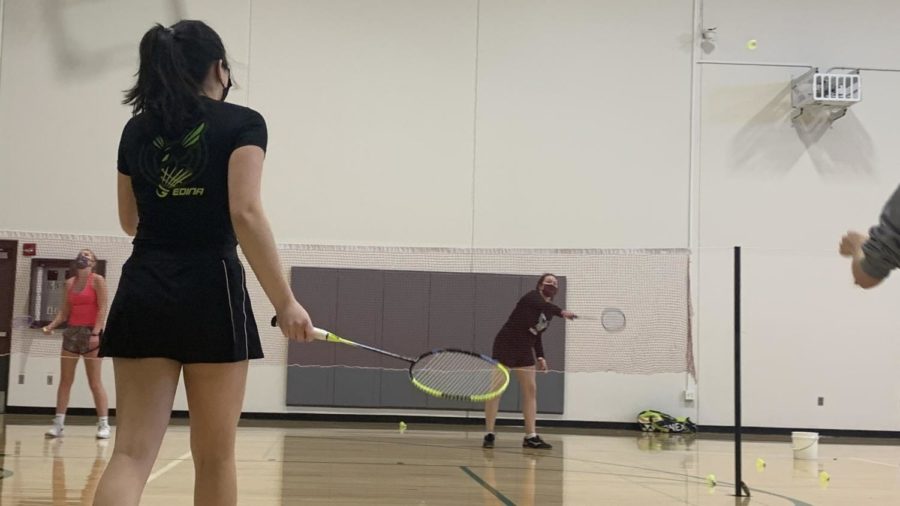 Rackets up: The Girls' Badminton team practices in the North Gym, in preparation for their weekly matches

This article was written for Stinglocker Athletic Magazine.

Athletes typically write stories about their dedication to perfecting their craft, often spending years on particular sports or coming from families who have put thousands of dollars into developing future professional athletes. When you think of these kids, you probably have an image in your head of what these athletes look like.

Entering high school, I never pictured myself joining another sport. I had been playing volleyball through middle school and was just solidifying my academics and extracurriculars. After doing well in the badminton unit in gym class, I decided to join the high school badminton team with a friend. Joining the team was a risk. I wasn’t sure how successful I’d be or if I’d even get to play many games. I was hesitant to talk to new people, and I certainly didn’t want to spend four years playing a sport I didn’t think would yield much.

Within the first few games, I was placed on the Junior Varsity lineup. I began practicing with the Varsity players, next to whom I felt I couldn’t compare. Many of them resembled the typical Edina athlete in that they were multi-sport players with extensive training. Their technique seemed flawless, and they excelled at the aspects of the sport that I struggled with. It was highly disheartening to compare myself with my teammates, who I starkly contrasted with.

Despite having dabbled in a few sports, I seldom considered myself an actual athlete. I fill my time with work from advanced courses and writing for the school newspaper. I serve various student board positions and work as a barista. Badminton is a single season of the year, outside of which I have little involvement. Ironically, my athletic and physical achievements have never once been at the center of my focus. I seek knowledge and competency, not athletic awards. How was I supposed to create a piece of writing that highlights my participation in my sport, while accurately reflecting who I am? The struggle between these two aspects of myself can be described as a symptom of imposter syndrome.

Imposter syndrome, as described in an article by Harvard Business Review, conflates race and gender stereotypes with a lack of representation. This article specifically mentions women in male-dominated environments suffering from imposter syndrome more than men due to a lack of women before them setting a precedent to success. In other words, our society’s image of success is so often a white man in a clean-pressed business suit that it fails to reflect the validity of women’s achievements.

My previous feelings of inadequacy are a direct result of this phenomenon, which Edina’s predominantly white demographic exacerbates. In a community like Edina, it is difficult to find role models that reflect my experience as a Chinese-American woman who is both intellectually and athletically involved. Looking back on my initial reaction to writing this piece, I realize that such feelings of inadequacy are exactly why the team has brought me success. By feeling relatively alone in my endeavors, I pushed myself to set my own example, thereby heightening my confidence in myself and my abilities. Ultimately, badminton has pushed me mentally in ways that continue to drive me towards my goals.

I could detail the typical scientifically-proven benefits of playing a sport that have brought me success: discipline, concentration, teamwork. While these are major bonuses, they don’t characterize what I most value from being on the team.

The thought of joining the team elicited mixed responses from my parents and family, but ultimately I decided to join for the sake of trying new things. By joining the team, I was reminded of the merit of stepping out of my comfort zone and that risks can pay off. Adapting in the face of adversity is one of my highest values, and by joining the team, I had stepped into a new phase that I was eager to explore.

Beyond the risk-taking aspect, being on the badminton team has challenged my perception of myself. Before joining, it was impossible for me to conceive of such rapid advancement, which drove me to work harder and continuously improve. Each practice was devoted to giving attention to the little details that decided the outcome of each match. I talked to older team members to learn about their experiences and the conversation typically pivoted to academics. Being able to look up to older team members once I joined the team helped me get a bigger picture of high school and the importance of delving into things outside of school. To me, that meant realizing the potential of my endeavors outside the classroom. Prioritizing my personal development above academics, I began to feel more comfortable with my place on the team.

Now, as a junior captain of the team, it is easy for me to look back and recognize the reasons I was riddled with self-doubt and uncertainty. However, as I’ve advanced through high school, it’s become apparent there are more significant things to preoccupy myself with than being nervous about how I’ll fit in. I haven’t spent as many years playing my sport as other Edina athletes, nor invested thousands of dollars into equipment, yet my time on the team has still taught me invaluable lessons, most of all an increased ability to think critically and apply my learning in different settings. Above all, my time on the team pushed me away from conformity and towards setting my own bar, which in the end, is the only one that I should compare myself to.