Sisterpreneurs: how the Bercaw sisters found success in the bath bomb business 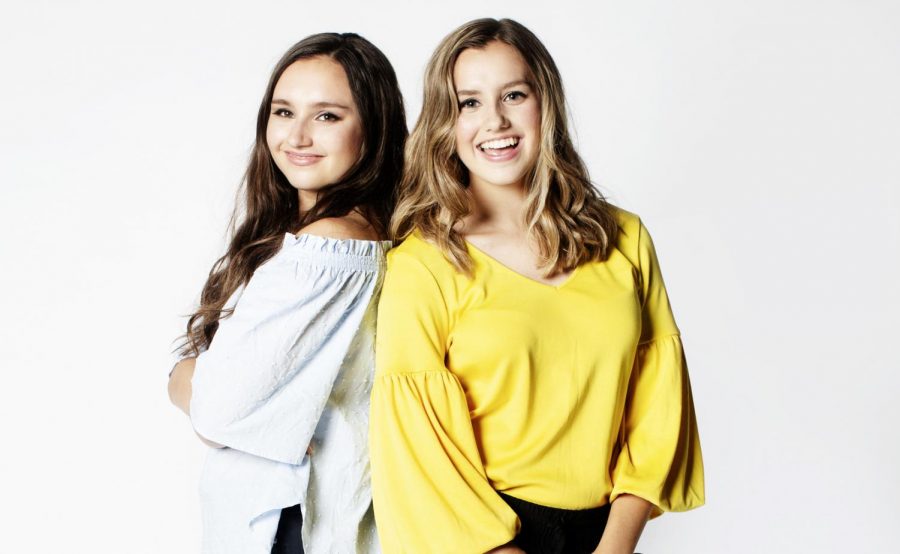 The Bercaw sisters are in constant motion; fielding questions, shooting off ideas for photo shoots, and demonstrating their intense work ethics as they walk me through their office and warehouse space. They’re confident and poised as they explain the success they’ve found as self-proclaimed “sisterpreneurs” from running their company, Da Bomb Bath Fizzers.

The company sells hundreds of thousands of their best selling product, bath bombs filled with surprises, during a single month. Most of the sales are made through their website and big names businesses, such as retail giants Costco and Target and more niche stores such as Ulta Beauty. If that wasn’t impressive enough, here’s the real kicker; the Bercaw sisters are teenagers, who split their time between work, school, and time with friends and family.

The pair has built a multimillion dollar company in nearly six years, cycled through a  45,000 square foot warehouse (they expanded in 2016 after securing a deal with Target), and has employed around 200 local workers. Their whole office is colorful and fun, managing to perfect the balance between productive and playful. As expected, bath bombs are everywhere and the lingering smells of coconut, almond, and floral scents hang in the air. Their top selling bath bombs include ones like the “F-Bomb,” which is lavender scented and contains an inspirational quote. The “Earth Bomb” smells like sea breeze and even benefits the oceans; a percentage of the proceeds go to organizations that help protect the world’s oceans, such as the Ocean Cleanup program.

One half of the sisterpreneur pair is Caroline, who is 16 and is a junior at Edina High School (EHS). Like most teenagers, she spends a fair amount of time on social media. The only difference is that her social media accounts are filled with videos and pictures promoting her products–short boomerang movies of colorful bath bombs and confetti fill her Instagram page. Isabel is 17, a senior nearing the end of her high school career at EHS, and if she has any doubts about her future, she hides them well, mentioning her plans for college and beyond.

The sisters take time to greet their employees as they point out the ins and outs of their production stages. The mixing room is covered in bright blue, pink, and glitter swirls of bath bomb powder and the pair excitedly point out their new box wrapping machine, which covers stacks of ready-to-be-shipped boxes in plastic wrap. This is a step up from the packaging system they used to have in their home basement when the company started in 2012.

The sisters began selling their homemade creations to local hair salons after selling out at a nearby art fair. At one point, the family had 80 employees working for them in their basement, as they started getting more and more deals with accounts, otherwise known as businesses. Both Isabel and Caroline shudder when reminiscing about the tape gun that used to wake them up in the middle of the night and laugh when mentioning that they didn’t have fingerprints, due to the enormous amount of bath bombs they were hand making at one point. 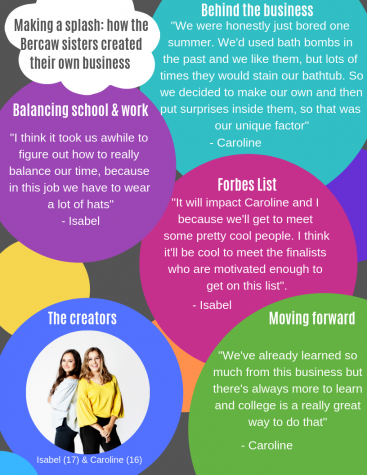 The company took off in 2015 when the sisters created their first website with the help of their parents. The basement-run business became an official limited liability company (LLC) and they moved into their warehouse the following year. Now, they have a bath bomb making kit in stores across the country and a book that they released last year. Most recently, the sisters made the 2019 Forbes ‘30 under 30’ list, which celebrates young entrepreneurs from different areas of business. The sisters are two of 600 recipients of the award for this coming year and both of them expressed their gratefulness for the award and said that they are most excited to meet the other finalists.

High school students are busy, and these young entrepreneurs are no exception. Caroline admitted that balancing school and work is challenging at times for both her and Isabel, “but time management has been a huge thing for us that we’ve had to learn”. Isabel echoed that statement, saying that “I think it took us a while to figure out how to really balance our time because in this job that we have, we have to we have to wear a lot of hats.” The sisters work with EHS to maintain their busy schedule and are involved in the On the Job program, which means they leave school early most days and head to their office. Isabel credited the On the Job program with helping them balance their work and school lives, noting that “it was a big deal for us when we finally got On the Job and figured out how to be all these different people because it was really difficult to try and balance everything at once.”

Both the sisters were adamant about pursuing higher education after they graduate; Caroline said that she’s interested in pursuing Business and Entrepreneurship, noting that “maybe I’d take the business east or west coast or just keep it with me” when she heads to college. Isabel is open to other options, admitting she’s interested in possibly taking a look at journalism when she heads to college next year. She emphasized that “no matter what both of us do, we can cater [our skills] to whatever we’re doing and we can always come back to business as well.”

The two teenagers mainly handle the social media and marketing aspects of their business now, which involves plenty of self-branding, business meetings, and consulting with their public relations (PR) company. They pointed out their photo shoot room, which is small but packed full with buckets of colorful confetti and their upcoming ideas for their holiday line of bath bombs. Their newest product is “Fizzlets,” adorable mini versions of their bath bombs that are sized down into little tablets.

Caroline and Isabel were 11 and 12, respectively, when they started their company. So, as young entrepreneurs themselves, they have plenty of advice for teenagers looking to make a break in the fast-paced world of business. Together, the sisters also rattled off their top five tips, citing the “Any Dream at Any Age” presentation they give at local high schools, rotary clubs, and rooms full of people looking for some inspiration. Innovation, persistence, hard work, creativity, and giving back are all important factors that the pair tries to keep in mind while running their business. Caroline recognized the hard work that goes into running a company, but noted that if entrepreneurs “expect a lot of hard work, then [they] can also expect a lot of opportunities.” She added that she “think[s] it’s important that you get what you work for, so if you want to be independent, you have to put in the work.”

Support the Bercaw sisters and Da Bomb Fizzers by checking out their website: http://www.dabombfizzers.com/