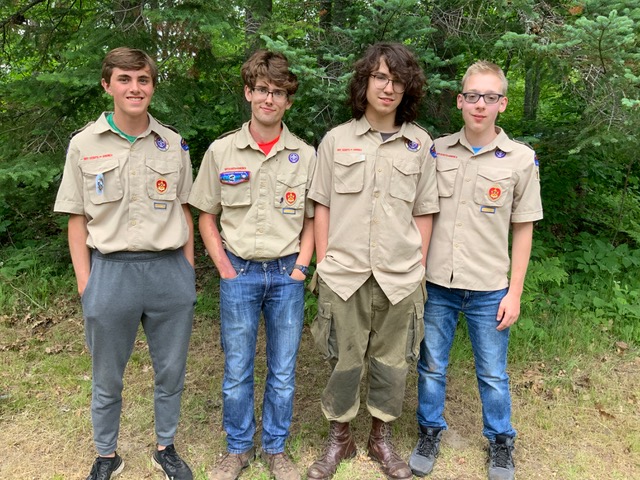 For many Boy Scouts, receiving their Eagle Scout award represents choosing to put in years of hard work and troop participation. Local Troop 123, set out of Shepherd of the Hills Lutheran Church, has plenty of connection to Edina High School, with nearly 50 Scouts who are students at EHS and three current EHS seniors working towards their Eagle Scout.

Scouts start out as Cub Scouts as early as kindergarten, work their way up to the Webelo rank around third grade, and then must earn the Arrow of Light Award and be at least 10 years old to bridge into Boy Scouts. Once they’ve joined Boy Scouts, they have until they turn 18 to receive their Eagle Rank. This includes amassing 21 or more merit badges, creating an Eagle Scout community-service-based project, and undergoing a review by the Eagle Board.

Senior Jack Pierre has been a member of Troop 123 since second grade and recently completed his Eagle Scout project this past fall: a one day wheelchair basketball camp. At the peak of his project, he estimated he was spending up to ten hours a week working on it. Senior Luke Osler is also a member of Troop 123 and estimated that he spent nearly three years on his own Eagle Scout project. Osler built a set of cornhole boards and latter balls for Concord Elementary. “A major challenge of getting an Eagle [Award] is working towards it consistently,” Osler said.

An Eagle Scout project is primarily meant to give back to a community and, as shown by both Pierre and Osler’s project, requires plenty of time and leadership. Leadership is a crucial aspect of scouting, especially as Scouts rise up in rank. “For me, when you get older it’s good to help; like I volunteer with the younger scouts and help them get their merit badges. It’s kind of nostalgic,” Pierre said about his leadership experience. “[In] a perfect Eagle Scout project you do no work, because it should be planned well enough and you should be an effective leader,” Osler said, tying in the life skill of leadership into his his Eagle Scout project. Typically, Scouts enlist friends, family, and other troop members to help them carry out their project.

Both Pierre and Osler had plenty of takeaways from their time in scouting, such as all of the life skills they learned and knowledge they gained. Besides an exclusive Eagle Scout Award, the pair will take the skills of leadership, honesty, and trustworthiness along with them into college and the workforce.