Release the floodgates: Edina’s response to the unpredictable 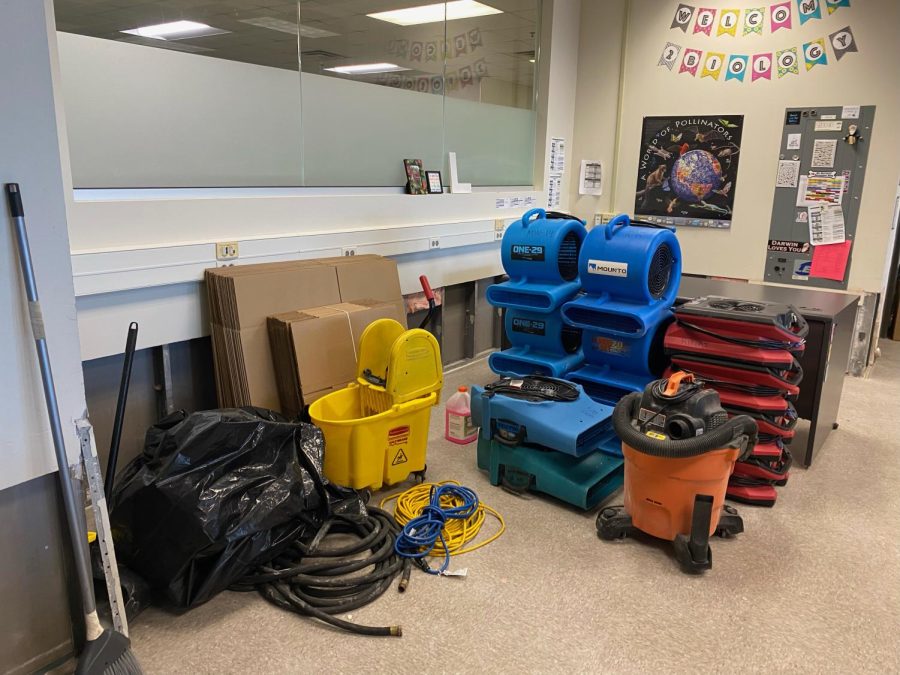 An email sent across the district on Monday, Jan. 3 described a “mechanical malfunction” that flooded the building on all three floors in the east wing over the weekend. Within minutes, students rejoiced over the prospect of two distance learning days. Some, like senior Alexis Stanton, perceived asynchronous class as an extension of winter break. “‘I don’t have to wake up at 7:30 tomorrow.’ That was the first thought I had,” Stanton said.

Earlier in the day, Biology and Comparative Anatomy teacher Colleen Luck received a shock that her classroom was ground zero of the school-canceling flood.

“That morning, I talked to [Mme.] Caster and she was saying that there was some flooding that happened in the high school. So I joke, and I’m like, ‘Hah! Probably the chemist left their stuff on.’ So after McLean calls me, I call her right back like, ‘Are you sitting?’ We chuckled a little bit.”

Unlike her classroom, which was inundated with water and closed off for repairs, Luck’s curriculum was mostly undisturbed. Most of her online work from last year’s distance learning was saved, lending to a relatively seamless adjustment to virtual class for Tuesday and Wednesday. “It was a pretty easy [transition],” Luck said. “The biology team is amazing, so it’s great to work with them. They’re so flexible.”

Next door, AP Biology teacher Stephen Sanger wasn’t quite as fortunate. “I found there were some files that got wet and I also had some paper models that got damaged,” he said. Thankfully, Sanger reported that no costly equipment had been damaged in either of his classrooms.

Sanger was relatively unphased when he heard about the leak. “I was like, ‘Alright, let’s figure out what we need to do to adjust to this change’ and so obviously, it’s frustrating…we’ve been doing [distance learning] for a solid two years now, so we’re used to taking in bad news and figuring out how to keep moving forward to accommodate.”

Although the news was sudden and unfortunate, Sanger and Luck quickly prepared to keep their students’ learning on track. Sanger reported spending nearly his entire last day of break reworking the week’s schedule with his fellow science teachers. While the switch required an upcoming test to be pushed back, teachers wouldn’t let the leak completely affect their plan. “I think everyone kind of rallied together to problem solve and to keep school moving, because obviously with final exams coming, we don’t want to keep kids out of school any more than we need to,” Sanger said.