Please turn it off: ‘Book of Mormon’ overspends its welcome 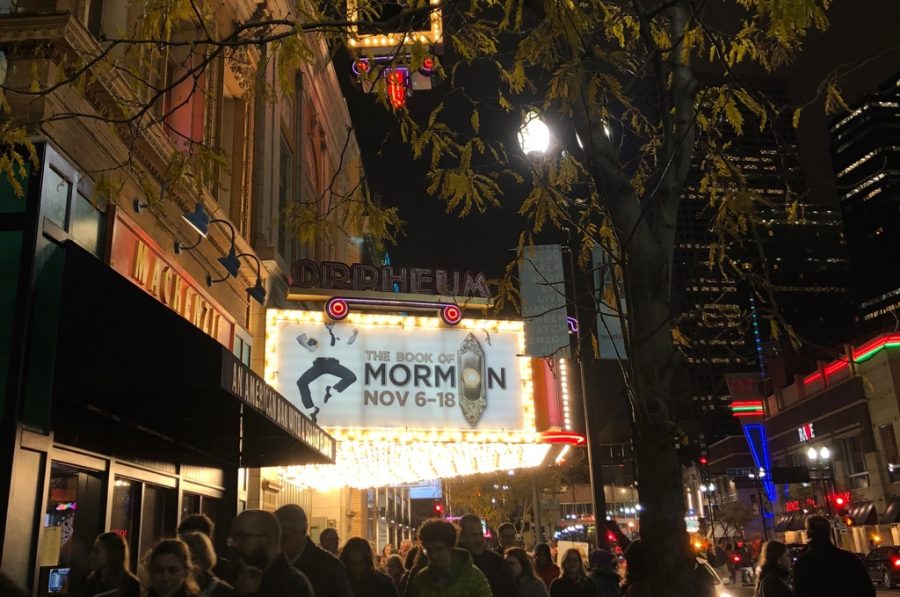 ‘The Book of Mormon’ has accumulated nine Tony Awards, over $500 million in revenue, and plenty of backlash. The show’s music and book were written by Matt Stone and Trey Parker, who created the TV show South Park together, as well as Robert Lopez, a co-creator of the hit movie and recent musical, Frozen.

‘Mormon’ follows two hopeful, sacred text carrying Mormon missionaries, as they journey across the globe to convert locals in a distant Ugandan village. Through much trial and error, racism, and energetic choreography, the pair discovers that being kind is something to strive for—ironic, considering this show lacks kindness.

The musical has already visited the Twin Cities three times, although its last engagement happened nearly three years ago, in 2016. ‘Mormon’ has overspent its welcome and time in the spotlight this time around during its return to the Orpheum Theatre in Minneapolis; with the themes of the musical hitting a little too close to home with all the events that have conspired over the past two years. The countless jokes about AIDS, poverty-stricken third world countries, and gun violence fall flat considering recent events. Given the recent shootings in Pittsburgh, it felt incredibly ill-mannered and uncomfortable to have an actor portray Hitler on stage, swastika and all. The show tries too hard to be too much, with excessive amounts of laugh lines, disco balls, and references to ‘The Lion King.’ But, behind it all lurks the inherently racist, sexist, and crass language, that no amount of glitter and “Hakuna Matata” jokes can cover up.

While ‘Mormon’ was mostly one big low, there were a few highs of the show. The first being Kevin Clay, who played one of the main missionaries, Elder Price. With a strong belt and key comedic timing, Clay held up the show and shone in individual numbers, including ‘I Believe’ and ‘You and Me (But Mostly Me).’ The second memorable part of the show was the ensemble of singing, dancing, and devoted Mormon missionaries. While the topics of their songs were undesirable, they left the audience laughing with their energetic choreography and costumes changes. Notable ensemble characters included the straightforward Elder McKinley (Andy Huntington Jones) and the biblical, Joseph Smith (Ron Bohmer). Finally, the set, designed by Scott Pask, played a large and memorable role in the show. With intricate details and a number of set changes only seen from high-revenue boasting shows, the set was one of the main highlights of the show. Framed by stain glass windows, the stage flipped back and forth from a remote African Village to Orlando, Florida, and colonial New York.

‘Mormon’ plays at Orpheum Theatre in Minneapolis from Nov. 6 to 18. A pre-show ticket lottery gives audience members the opportunity to win up to two tickets for $25 each, as well as student and educator rush seats that range from $30-$40. Due to the language and content matter, parental advisory is strongly advised and while there is no official age limit, it’s recommended that parents use their best judgment when deciding to take their children along.