Once upon a December, “Anastasia” performs in Minneapolis 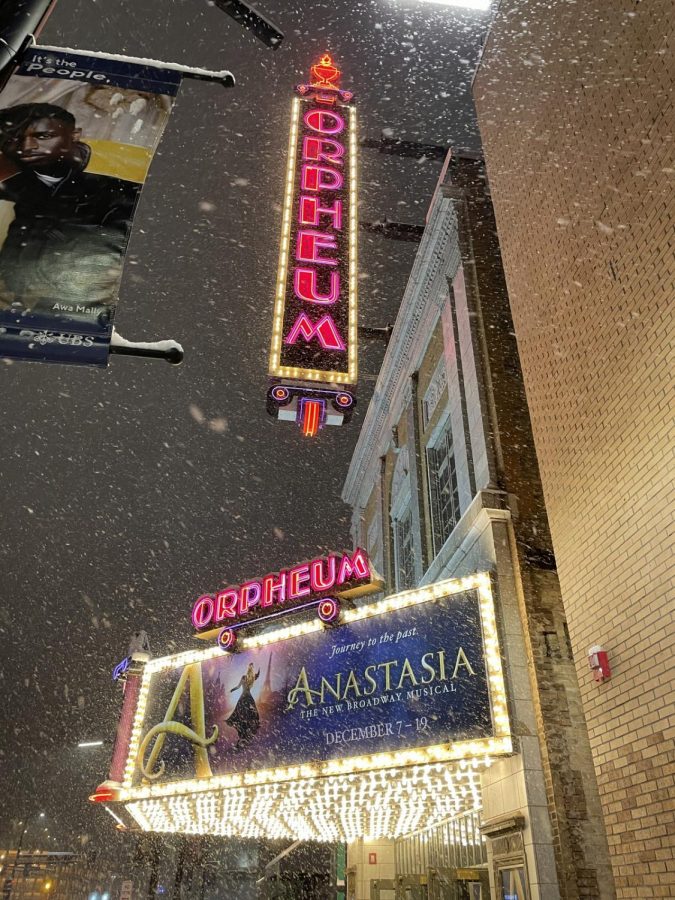 History and modern culture meet in the Orpheum performance of “Anastasia.” Against the backdrop of 1920s Russia and France, a talented cast’s vocal range and modern dance moves like the “bend-and-snap” make for a delightful performance.

“Anastasia” tells the legend of Anastasia Romanov (Kyla Stone), a Russian princess and Tsar Nicholas II’s daughter. Romanov family is executed in 1917, Anastasia makes it out alive, but with a case of amnesia. All the while a rumor that the long lost princess of Russia lives spreads throughout Saint Petersburg, Anastasia sweeps the streets for a living. She bands together with commoners Dmitry (Sam McLellan) and Vlad (Bryan Seastrom) to return to her grandmother in Paris.

It didn’t take long for me to get enraptured by the story. The musical starts out at a grand party, with the Romanovs looking prim and proper. What really stood out was the creative use of lighting. As the Romanovs posed for a photo, a bright flash went off, but there was no photographer on stage. The audience sees the picture head on, as it was taken.

The contrasting environments and economies of the two countries are shown onstage through the creative lighting techniques. Red lighting often shows up when Russia is mentioned, while lighter pinks and pastels are used in Act II when the characters are in France.

One large set piece sets the show apart from others. The outline of a building with windows sets the frame of the stage, and pictures are projected onto the scrim to establish a setting. For a show that takes place in various different places, it was a creative use of space. It gave the illusion of a set background without having to build a whole new set piece that fills up half of the stage.

The dancing was good, except for one number. The main characters attend a “Swan Lake” performance while they are in Paris. While the choreography is a true variation, the Broadway-trained dancers did not fare very well in a ballet and pointe dance. Apart from that, the ensemble cast did a fantastic job, and were the best part of the show.

The choreography played just as big a part of it as well. The dancing at the Romanov party had Russian roots, with hints of ballet. After the setting moves to Paris, the choreography is more flapper-like, bringing out the années folles aspect to 1920s France.

The ensemble played various different parts: Suitors, soldiers, comrades, ghosts, Russian aristocrats in exile, reporters, etc., and executed the roles to perfection. The Russian soldiers danced how soldiers typically would, with a stiff composure, while the Russian Aristocrats in Exile danced in a playful manner, giving the illusion the actors are actually drunk and having a fun night out at the nightclub.

With amazing execution by the sound and lighting crew, and historically accurate choreography, “Anatasia” combines aspects of the Disney movie and the real history of it all, making the show a wonderful performance for all audiences to enjoy.