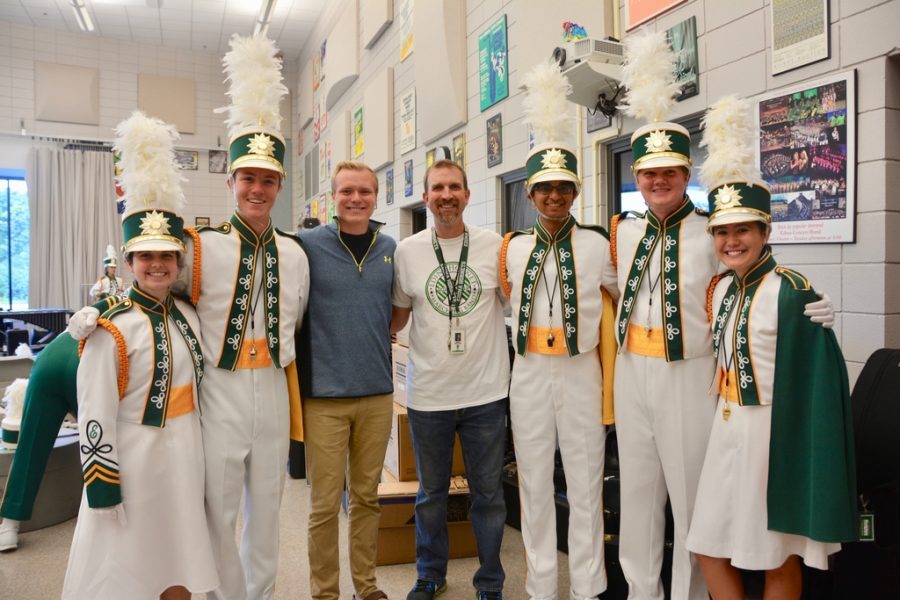 Marissa Dulas, Clarinet
Favorite Marching Band memory: One of my favorite memories was the Branson trip and just getting to know everyone. We had our days together and got to play different Marching Band tunes. We got to spend together, and also went ziplining! Also, this year at Band Camp, being a Drum Major it was very fun to connect with everyone. We got to pick the Spirit Days and seeing the new people and training them was also very fun.

One thing that marching band has helped her learn: In general, Marching Band has made me be more confident in myself. I think throughout the years I’ve made so many new friends through band and the whole community has made me a better person and a better leader as well.
Owen Gordon, Clarinet
Least favorite Marching Band song: I’m not a big fan of “Hey Baby.”

Favorite Marching Band memory: I really like when we get to play at the St. Jude Run/Walk Pep Band event. We’ve always been able to play on the US Bank Stadium.

Favorite event to play: Homecoming games are always the most exciting because we get the biggest crowd and we have the chance to impress the most amount of people!
Om Jahagirdar, Tenor Saxophone
Favorite Marching Band memory: My favorite memory would have to be during the sections time because the tenor saxophones are a super small section of six or seven kids so you really have to get to know everyone really well.

Something he’d like to say to peers: Great job out there! You guys are all awesome! I have a great time and I’m honored to be a drum major!
Alex Seitel, Flute and Piccolo
Favorite Marching Band song: My favorite halftime show was during my sophomore year, and I really like playing “Konga”, but this year my favorite song is “Dynamite” because I get to conduct it.

One thing Marching Band has helped her learn: It’s taught me the importance of finding a community and being part of one that you’re involved in. Like I’ve said, sophomore year, I didn’t expect to like band so much, but you have to go in with the mindset that you want to meet new people and get involved.
Thomas Tuchenhagen, Baritone
Least favorite Marching Band memory: The three hour long practices we used to have.

Something he’d like to say to his peers It’s been an amazing experience and I couldn’t have asked for anyone else. Everyone in band is very cool and it’s a great community.

One thing that Marching Band has helped him learn: The importance of community; the group of people in band is very great!