It’s time to stop believin’ in Rock of Ages 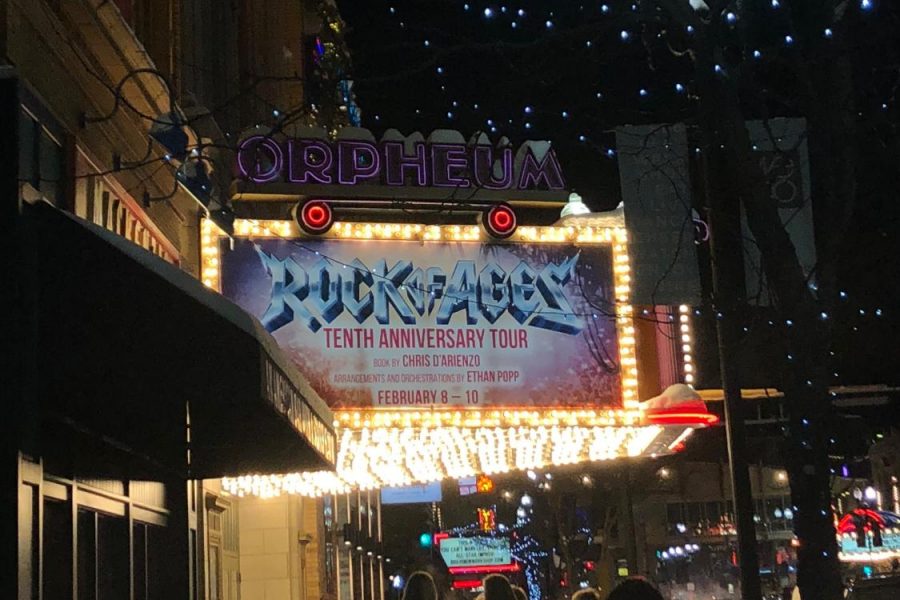 ‘Rock of Ages’ is a jukebox musical based around rock hits from the 80s. Written by Chris D’Arienzo and directed by Kristin Hanggi, the show premiered on Broadway in 2009 and by the time it closed in 2015, it tied as the 29th longest running show. The show has a film adaptation with the same name, as well as numerous worldwide tours. It was nominated for five Tony Awards, including Best Musical and Best Performance of a Leading Actor.

The musical is set in the late 80s and follows a pair of aspiring lovebirds and rockstars, Drew Boley (Anthony Nuccio) and Sherrie Christian (Katie LaMark). The narrator, Lonny Barnett (John-Michael Breen) tells the story of our star crossed lovers, as they fall in and out of love. Simultaneously, their community and city planner, Regina (Kristina Walz), fights to save the future of the Sunset Strip from notorious Germans, Hertz Klinemann (Andrew Tebo) and his son, Franz (Chris Renalds). Spoiler alert: they get back together and the city is saved.

Set to a background of rock and roll songs that really only Generation Xers and older will enjoy, ‘Rock of Ages’ has it all; booze, the ever nefarious fourth-wall breakage, and sex; lots and lots of sex. The set, designed by David Gallo, is bare bones, with creative uses of amplifiers, speakers, and other types of moving equipment you’d picture a roadie wheeling around. The big ticket item is a handheld fog machine that the narrator totes around.

In general, I’m not a fan of fourth wall breakage; I think it pulls the audience out of the show too much and takes away from the elusive theater magic. But halfway through the third, (mostly likely) wine-induced singalong from the section of suburban moms in front of me, I was more than ready for the narrator and his fog machine to come back and tells us more about the simple plot line; jangling carabiners and oddly tied bandana be damned. There’s only so much “High Enough” and “Any Way You Want It” to pole dancing (!) a simple Generation-Z girl like me can stand.

The problem with ‘Rock of Age’ lies not within the music (the band was authentic and really the only true rock stars of the show), or the predictable plot line or even the ridiculous amounts of innuendos used. It’s that the show is a parody of classical musical theater; complete with dancing bricks (you already know it was to “We Built This City) , jazz hands, and even a narrator that ironically explains to the audience how much he dislikes being a part of a musical that includes poop jokes and Whitesnake.

‘Rock of Ages’, with its star crossed lovers, teeny-tiny skirts, and ten-minute long curtain call to “Don’t Stop Believin’” tries so hard to be bad that it’s….well, bad. Unless you’re a diehard fan of 80s glam rock and enjoy sophomoric humor so immature it feels more like freshmoric humor, then Rock of Ages isn’t your show. Don’t worry, just hop onto a midnight train somewhere else and take your jazz hands with.