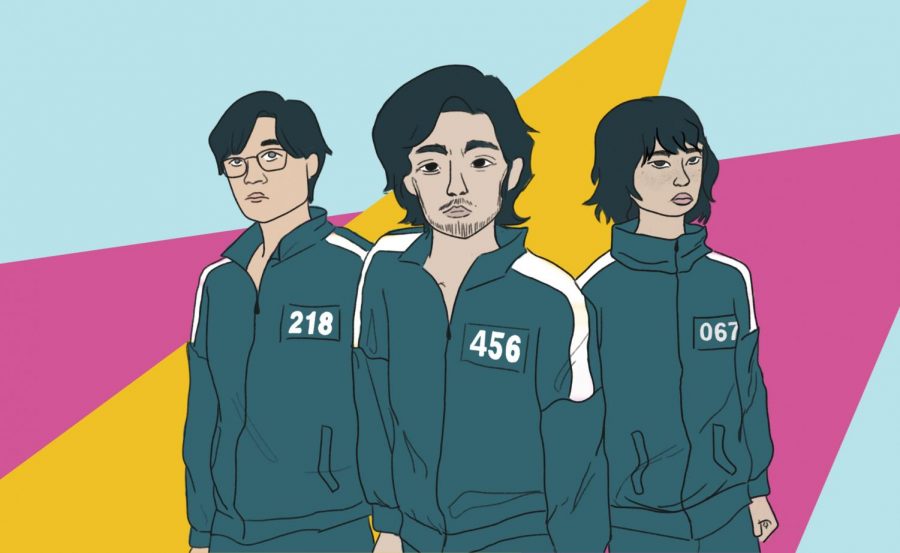 In the past couple of weeks, hordes of Tik Tok videos and Instagram posts have been created by people sharing their opinions on Netflix’s newest and currently most popular show. “Squid Game,” written and directed by Hwang Dong-hyuk, follows the journey of a young man, Gi-Hun, striving to erase his debt as he enters a contest of children’s games with a deadly twist.

Roaming through the hallways of Edina High School, you can hear the rampant discussion about the show. With six hour-long episodes, “Squid Game” reveals the lengths that people will go to in order to strike it rich. 456 people are coerced into joining a competitive game that leaves the last person standing winning 45.6 billion won (around 40 million USD). *SPOILERS AHEAD*

The show centers on the personalities of its characters, as they’re meant to represent how different people would react if put in the same scenario. While some find their failure in giving up, others resort to selfishness and lose sight of their morals. Few are able to die unstained by guilt, while the ones who are willing to help other competitors jeopardize their own lives.

Seong Gi-hun, played by Lee Jung-jae, is one of the most appealing characters, as his charismatic personality is understandable, engaging, and lets you laugh the pain away. Gi-hun constantly keeps viewers on the edge of their seats as his wit unveils under pressure; in the second episode, the second game entails completing an meticulous task within a relatively short time frame. Gi-hun begins by using the most straightforward process, but as time ticks away, he adopts a clever method that allows him to win at the last second. Lee accurately portrays the inner turmoil accompanied by murder and betrayal—his constant assertions that all comrades will survive creates hope in the audience, giving them an incentive to keep watching.

Hwang cleverly humanizes the characters and causes viewers to sympathize and connect with them. This is highlighted in the case of a frail old man, Oh Il-nam, played by O Yeong-su. Eventually, Il-nam’s age hinders his ability to play, and viewers watch as he suffers from ailments the other, younger competitors don’t have to deal with.

Contrarily, Hwang includes characters at which the audience can get angry, such as Park Hae-soo’s character, Cho Sang-woo. He takes any means necessary to survive, and puts others in danger seemingly without any remorse. His actions highlight how a significant portion of the population would act in his shoes, likely due to their intense desperation. This need to win at any cost stems from the desire to risk their lives rather than live with debilitating sums of debt. As Sang-woo represents this harsh reality, characters like Gi-hun portray the rare ethical people of the world.

The female lead, Kang Sae-byeok, played by Jung Ho-yeon, is the classic, self-reliant, and risk-taking heroine. In response to Sang-woo’s frequent sexist comments, she says nothing, but instead proves him wrong by surviving beyond his expectations. Ho-yeon’s portrayal of Sae-byeok’s cold exterior and tender interior manifests in smaller moments, like when the audience first sees her emotional over someone other than her brother. Her character’s death importantly illustrates the nature of some when money is on the line.

The successful performance of “Squid Game” has resembled the breakthrough of “Parasite” (2019), both products of South Korea. It can be incredibly difficult for shows in foreign languages to be well-received in the US, even through one of the most popular streaming services in America. As the US starts to drop some of the negative stigma surrounding international sources of entertainment, film-makers around the world can begin to receive the awards and recognition that they deserve.

“Squid Game” entrances viewers because they adopt a small sense of normalcy even as the events of the show spiral into madness. Shows like these educate us about real problems, like poverty, and get the gears turning in our heads about how to solve them.