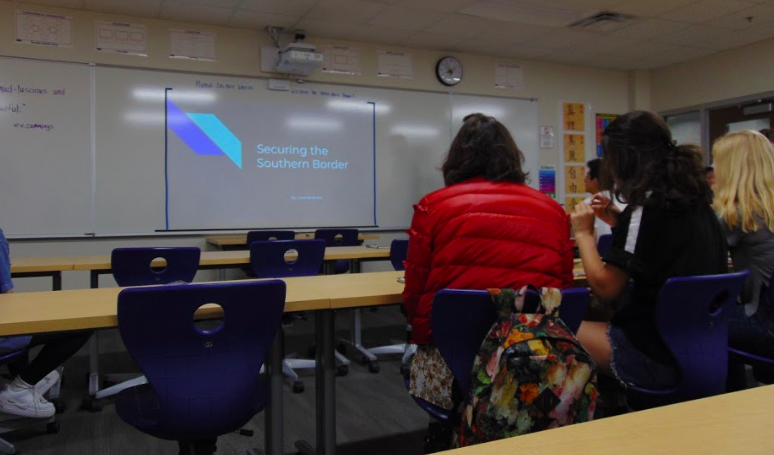 With the 2020 presidential election nearing, many students at Edina High School have discovered the importance of fostering friendly political discussion. While politics can be a controversial topic, the Hearing the Other Side club has become a space for students with various political opinions to discuss core national and regional issues, like abortion, immigration, gun control, and the Electoral College.

Although the club has only been around for a little over a month, junior Claire Nelson has envisioned the club for over a year. “[The club] is a way to teach kids how to talk politics in a polite manner. We’re learning how to be appropriate even when you’re hearing opinions from people you disagree with,” Nelson said.

While it may be difficult for students to express their opinions in the classroom, the club provides a moderated way of understanding people with different political beliefs. “I feel like it’s a good place to have peaceful political [discussions] because I don’t think that there’s enough of that at this high school,” freshman club member Arya Mirza said.

The club is student-led and structured through presentations and discussion rather than debate. They begin by reviewing guidelines for their discussion, and then allow five minutes of presenting for each side of the prompt. Then, the rest of the meeting is spent discussing as a group, asking questions, and filling out reflection sheets to conclude the meeting.

Thus, the club allows political discussion to be done in a more deferential manner, regardless of how opinionated students are. “Generally, I’m really outspoken about my beliefs, so no matter what other people say, I will always stand my ground. But in the club, if you really disagree with someone, you need to stay respectful,” Mirza said.

Nevertheless, the club’s intentions are to teach students how to converse more maturely on tough and controversial topics so that they are able to apply these skills beyond high school. “I think that our country is really divided politically, and it’s caused a lot of tension where there doesn’t have to be tension. I think that it’s really seen in our school too, so I thought it would be good to teach kids how to talk politics so they can carry that out past their high school experience,” Nelson said.

As for the future of the club, Nelson hopes to involve speakers from organizations that facilitate bipartisan political discussion among adults and college students. “I’m interested in having the club expand to more people and have people feel welcome to come in and listen to the presenters and make it a fun thing to learn about politics,” Nelson said.

Above all, the club wants to empower students to become politically involved. “We’re going to be the ones making an impact on the world, so being able to respect other people and have conversations without screaming or fighting is really important,” Nelson concluded.