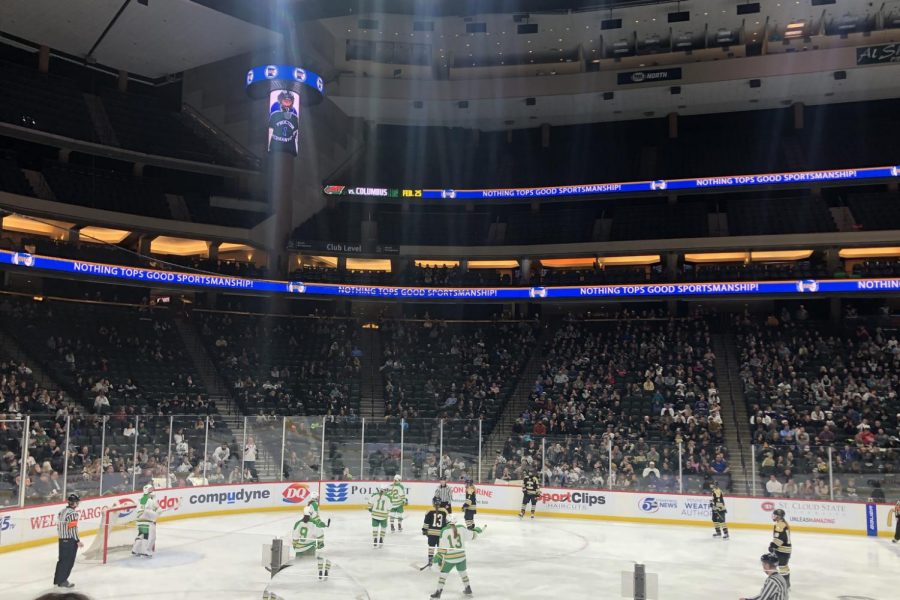 Just like the past three years, the Edina Girls’ Hockey Team entered the 2020 state tournament seeded first, this time hungry for their fourth consecutive 2A state title during their eighth appearance at the state tournament. While they walked away with second place medals instead of first, the Hornets left everything on the ice; their pathway shining light on the progress girls’ hockey has made in the last few years across the state of Minnesota.

The on-paper favorite, the Hornets were fresh off a regular season with a record of 26-1 and a 3-2 win over Wayzata to win section 6AA, clinching their spot in the state tournament lineup. Opening their first quarterfinal game on Thursday night, Edina faced off against Burnsville, a team they hadn’t seen all season due to their separate, regular season districts. The Hornets came out strong, with sophomore Vivian Jungels scoring their first goal a mere 34 seconds into the game. The goals kept coming in the first period, first from junior Emma Conner, and then from senior captain Tella Jungels off of a backhanded shot.

The second period was scoreless, and Edina’s last goal came late in the third period, thanks to a top-shelf, no-look goal from senior captain Lucy Bowlby. While pleased with the overall score of 4-0, Edina coach Sami Reber wanted more from her team, especially after their performance in the lackluster second period. “I think we [have] to put together a full 51 minutes come tomorrow night,” Reber said, noting that the team’s “energy needs to be constant throughout every game and really, everyday.”

Come Friday night, Edina faced the fifth seed, Maple Grove, in the semifinals. The Hornets piled on the pressure in the first period, with Maple Grove’s goalie, Brooke Cassibo, holding strong. Tella Jungels scored shorthanded with ten seconds left in the first period, with Edina outshooting Maple Grove 15-7 and racking up three penalties. Once again, the second period remained scoreless from both teams, and the pacing slowed as Edina’s offensive attempts were thwarted.

“[Maple Grove] did everything, every little thing right to frustrate us and hats off to them,” Reber commended. The Hornets stood strong when faced with five power-play opportunities by Maple Grove, in large part due to freshmen goalie, Uma Corniea, who Reber credited as their “best penalty killer and our best [defensive] zone player.”

After a strong performance from Corniea, who stopped numerous odd-player rushes and attempted breakaways, Vivian Jungels scored off a textbook perfect passing play from junior Hannah Chorske and sister Tella late in the third period. Bowlby found the empty net and clinched the Hornet’s 3-0 win with 50 seconds to play in the game.

“Edina is right now a very special team…they’re well coached, they’re disciplined, they play for one another, and are just a great team,” Maple Grove coach Amber Hegland said after the game. She added that if Maple Grove had gotten a puck past Corniea, she would have asked to keep it, accrediting Corniea’s success in goal.

Looking ahead to Sunday’s championship game, Edina faced Andover, the second-seeded team, who had beaten the Hornets 0-1 during their first game of the season, the only defeat they had. “We’ve been taking it one game at a time, but since they’re our only loss this season, we’ve really been looking forward to trying to get another shot at them,” Tella Jungels said, impressed by Andover’s depth of skill and skating abilities. Corniea, who has won two class 1A championship titles with Breck before transferring to Edina this season, said that the Hornets “just need to treat [the championship] as another game. . . we just need to go play the game we love.”

And play they did. The first few minutes of the game saw plenty of back-and-forth action from both teams as they raced to set the tone and get on the scoreboard. The Hornets scored first on the powerplay, first from Conner and then from senior Katie Davis as Andover killed off two penalties. But then the Hornets found themselves in a similar spot, with two penalties of their own to kill off at the end of the period.

With a strong penalty-kill and a few close calls, Edina got back to full-strength with two minutes remaining. But, the momentum had already shifted, and Andover answered with two goals of their own, just seconds apart, to tie up the game. “Against a team like Andover, you can never let up. Ever,” Reber said.

Straight away in the second period, Davis scored again on the power-play, giving the Hornets the lead. Minutes later, Andover responded, scoring their third goal against Corniea, the most she had let in all season. The tail end of the period saw numerous penalties from both teams, with both the players and crowds heating up inside the Xcel Energy Center. “They were all over us,” Davis said, in response to the physical play by Andover, who shut down the Hornets in the neutral zone and on their offensive zone entries.

The third period was tense, as the score remained tied until the very end. With a packed crowd, competing student sections and bands, the tension in the Xcel Center was palpable. Both sides of the crowd were frantic, cheers and groans echoed across the rink with each missed scoring opportunity and clink off of the pipe. After plenty of anticipation, Andover scored, leading the game 4-3 with four minutes remaining in the final period. The Hornets fought back hard, but couldn’t claw their way back on top, with Andover sealing the deal by scoring an empty-netter in the last 30 seconds. “They’re an incredibly talented, skilled hockey team. . . they took it to us tonight, [and] unfortunately, we just couldn’t get going,” Reber said after the game.

While the outcome wasn’t what Edina was looking for, or even what their fans expected, both teams pointed out the significance of the game. The matchup between the #1 and #2 seeds garnered almost 6,000 fans in attendance, nearly doubling the amount from last season. While Edina was just named the “center of center the hockey universe” by ESPN, Minnesota in general has seen a rise in the popularity of girls’ hockey, up by 9.6% in participation over the past five years.

Young, female hockey players have also seen an increase in role models to look up to. In the state tournament alone, all four teams in the semifinals were led by female coaches. Across the state, the University of Minnesota Women’s hockey team has won six National College Athletic Association (NCAA) titles, and the Whitecaps, who are apart of the National Women’s Hockey League (NWHL) and are Minnesota’s first professional women’s hockey team, have seen rising popularity. The US Women’s National Team, who won the gold medal in the 2018 Olympics, included seven players from Minnesota, and in late April, the Women’s Hockey Association of Minnesota (WHAM) will be hosting the girls’ and women’s national championships in Blaine.

Community based programs found across the state, such as Edina and Andover, help to foster success throughout a variety of age groups, while growing the game. Andover coach Melissa Volk noted the accomplishment of their win reflected the development of their program in the last few years. “What’s really exciting too, is to have all that community support—all those young girls who are also doing a great job out there,” Volk said.

Reber also noted the importance of the game on such a big stage and for Edina’s program, thanking her four seniors for their accomplishments and everything they’d given to the program. “I’m really happy with the way it was a back-and-forth game. For the crowd, the people, and for girls’ hockey in general, I think that’s exactly the type of game people wanted to see.”