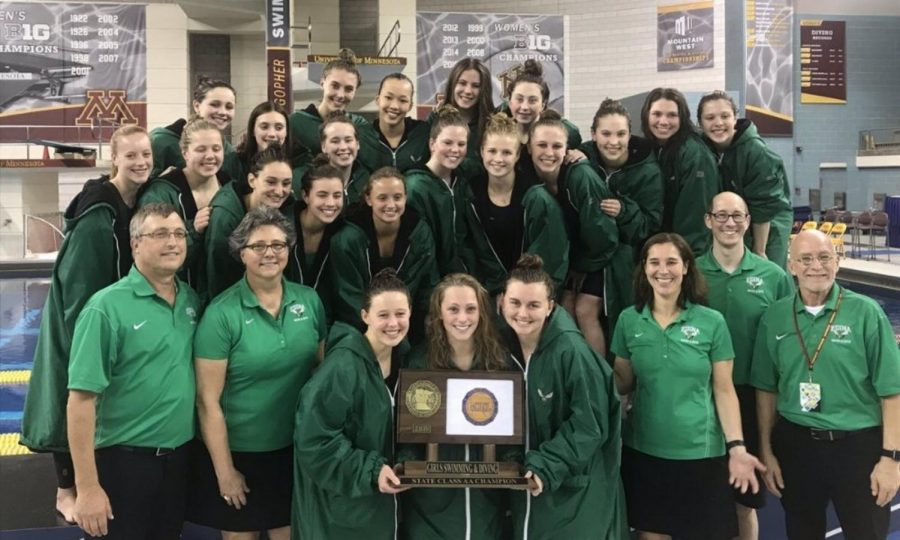 On Nov. 16, the Edina Girls’ Swim and Dive won the Class 2A State title for the third consecutive year. Edina scored 365 points to Minnetonka’s 231 points and Wayzata’s 186 points.

In addition to the expectation to win as the defending champion, “there was pressure because the Minnetonka Skippers were really confident going into the State meet,” senior teammate Caroline Westholder said.

This was due to Minnetonka’s win at True Team State, an invitational meet to determine the best overall team, rather than which team has the most top finishers. Westholder cited wearing fast suits and resting, or “suiting up and tapering,” as a factor in Minnetonka’s victory.

John Sherman, a writer for local newspaper the Sun Sailor, wrote about Minnetonka’s win at True Team State, titled “Minnetonka washes Edina hopes away in swimming.” The article helped motivate the Edina team to swim fast. “It helped that many people did not believe the Edina could win this season. It built on our energy to prove them wrong,” sophomore Brecken Merkel said.

Additionally, the team atmosphere at State contributed to the fast swimming. Compared to True Team, “the energy was a lot higher at State. For me, I swim my fastest when I’m under pressure. Everyone was super hyped and our whole team was cheering,” sophomore Lily Gremmels said. Junior Nora Clarkowski finished second in the 50 Freestyle with Gremmels as the Champion.

Other victories included sophomore Claudia Chang’s 200 and 500 Freestyle wins, and junior Katie Murphy’s school record of 56.20 in the 100 Backstroke, placing her third. Junior Megan Phillip won the diving competition with 517 points, breaking the 1997 State Record of 507. The relay team of Chang, Merkel, Clarkowski, and Gremmels won Edina the 200 and 400 Freestyle Relay. “The four of us [the relay team], are so dedicated and we’ve been working hard this whole season. We were just piggybacking off of each others’ hype. It’s a relay, so not all of it [the pressure] is on you like an individual event,” Merkel said.

Throughout the season, the team’s energy grew. Head Coach Jeff Mace’s pre-State pep talks, built upon that energy. Mace goes through each individual event with the team as his audience. He’ll remind each swimmer what to focus on, and the expected race time. “It’s scary but it gets your heart pumping and the rest of the team is cheering. The atmosphere of all it, is very exciting and intense,” Merkel said.

Furthermore, the strong support system within the State Team enabled the swimmers and divers to perform at their best. “During high school season, every girl is there for each other. If we win an event, it’s not just one person winning the event. It’s our team winning the event,” Merkel said.

Although it’s Edina’s third consecutive swimming and diving title, the experience feels different each year for the participants. The first year, Gremmels did not make the State team. She made the team the second time but did not contribute to the win. However, her third year, she racked up many points for Edina. “Each year because the team itself changes, I feel like it’s a new experience. It’s like winning for the first time all over again,” Gremmels said.

In the end, it’s the difficult 2.5 hour swim practices and the 6:30 a.m. dryland that form the team’s close bonds. “We’re all very close … We’re together all the time, in and outside of the pool, we’re best friends,” Westholder said.