FDA cracks down on Juul regulations

EHS students who use the product will face new challenges 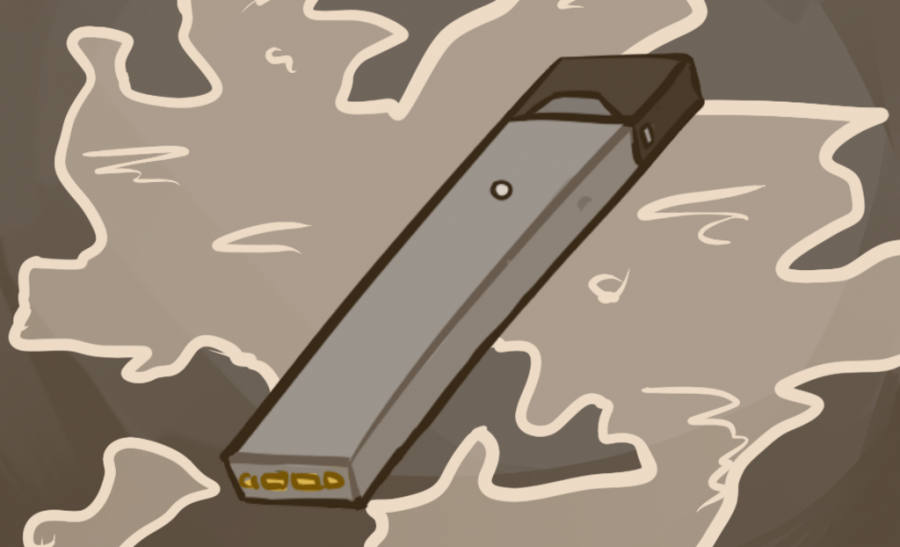 Mango, mint, and fruit medley—traditionally refreshing flavors of gum, these are actually Juul pod flavors. Juuls are the #1 selling e-cigarette in the country, and although federal law prohibits sales to minors, the Food and Drug Administration says that the various sweet flavors of Juul pods have been especially appealing to high school students.

Juuls, which the Centers for Disease Control say are shaped like USB flash drives, use pods filled with a mix of chemicals, nicotine, and flavoring. E-cigs, like Juuls, are intended to provide a safer alternative to smoking for cigarette smokers, but after hitting the market, teenagers who may have never smoked a cigarette before started becoming addicted to nicotine delivered via Juuls.

The increase in Juul sales to teenagers has not gone unnoticed as the FDA promised to remove Juuls from the market if Juul Labs don’t halt sales to minors. “[The FDA] has conducted 978,290 retail inspections, issued 77,180 warning letters to retailers for violating the law and initiated approximately 18,560 civil money penalty cases, as of Sept. 1, 2018,” the FDA reported.

Students at EHS have widely varying opinions on FDA restrictions on Juuls. “It’s stupid to get a nicotine addiction from a Juul. People vape to get rid of nicotine addictions, but now people do it just because others do it, which is dumb because you’ll live with an addiction your whole life,” a student at EHS who preferred to be anonymous said.

“The regulations will probably be effective because I know people who have gotten their Juuls taken away and they just stopped Juuling entirely,” the student said.

However, without Juuls and other e-cigs, students may begin to turn to smoke cigarettes or even marijuana. “Weed is an alternative, but for the younger generation, fewer people will start because it’s harder to get than Juuls,” the same student said.

On the other hand, an EHS senior who owns a Juul and preferred to be anonymous has varying opinions. “All I’ve really heard is that Juuls can mess up your lungs, but I don’t really think that’s true,” the student said. In fact, according to the Centers for Disease Control and Prevention, Juuls are especially damaging to the adolescent brain and flavoring in Juuls can cause lung disease.

However, Juuls are still increasing in popularity among high schoolers, “I think that they’re easier for teens to buy and they’re not as bad as cigarettes, so that’s why they are so popular. They are expensive, which can be hard for teens,” the student said.

Overall, the FDA has made it clear that ending illegal Juul sales is its priority, so restrictions on Juuls may tighten sooner than students think, as Juul sales to minors have proven to be on the rise. If Juul sales are halted, high schools all over the country may see a decrease in e-cig usage among students, or alternatively, they may find that students will resort to finding a new means of getting their fix.