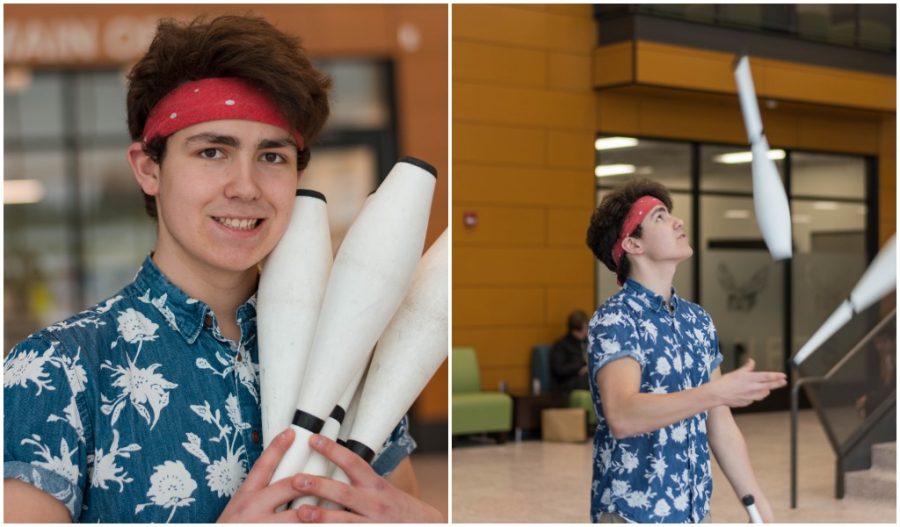 Throughout history, circus performing has been synonymous with dancing elephants and men balancing on tightropes in colorful tights. With those images in mind, it may seem strange to picture a modern high school student performing in a circus rather than playing oboe in band or playing shortstop on the baseball team. However, circus combines performance and athletics and is, for a handful of talented Edina High School students, the perfect after school activity.

EHS Senior Daniel Van Hoomissen and has been involved in circus acts of various kinds for years. Currently, Van Hoomissen is a student and coach at Circus Juventas, a St. Paul based youth circus school.

“In seventh grade, my brother started juggling and I wanted to be like him, but then I got interested in the entire circus arts at a juggling festival when I decided I wanted to go to a circus university for college,” Van Hoomissen said. “I’ve been juggling specifically for five years, but I’ve been doing other circus acts for a little over a year now.”

Even before Van Hoomissen joined Circus Juventas, he was a very accomplished juggler, competing at the International Jugglers’ Association Stage Championship, something he’s now done many times. In addition to juggling, Circus Juventas challenges their students to engage in a wide variety of circus activities such as trapeze, trampoline acrobatics, or even spinning in giant Cry wheels. “I really love juggling and I’ve been doing it for a while but then the other circus acts are so fun. Like sports, you’re using your body a lot and it’s really nice to get the physical activity, but it’s something different and you’re using your body in so many different ways that the creativity is endless,” Van Hoomissen said.

To an outsider, circus acts may appear to be dying out. The iconic Ringling Brothers Circus held its last performance in 2017, and animals have been slowly phased out of circus acts due to ethical controversies and the work of animal rights groups. Replacing these are performing acts such as Cirque du Soleil, which features a combination of modern technology and traditional circus, leading to a more theatrical show. “It’s definitely going away from the Ringling Brother Circus where that’s like the traditional classic circus, now it’s more contemporary, they’re telling a story, sort of like Cirque du Soleil is probably the biggest one right now and most popular,” Van Hoomissen said.

Circus is not just a hobby for Van Hoomissen. After he graduates high school, he plans to pursue circus professionally. “I’d go [to college for circus] for three years and then it kinda just spits you into the professional circus world…Out of my friends that are going, including myself, there are only like three people that are auditioning for the schools in the upcoming years. Some go straight into a circus or something like that,” Van Hoomissen said.