In light of recent calls for a more environmentally city, Edina creates a subscription-based solar "garden" 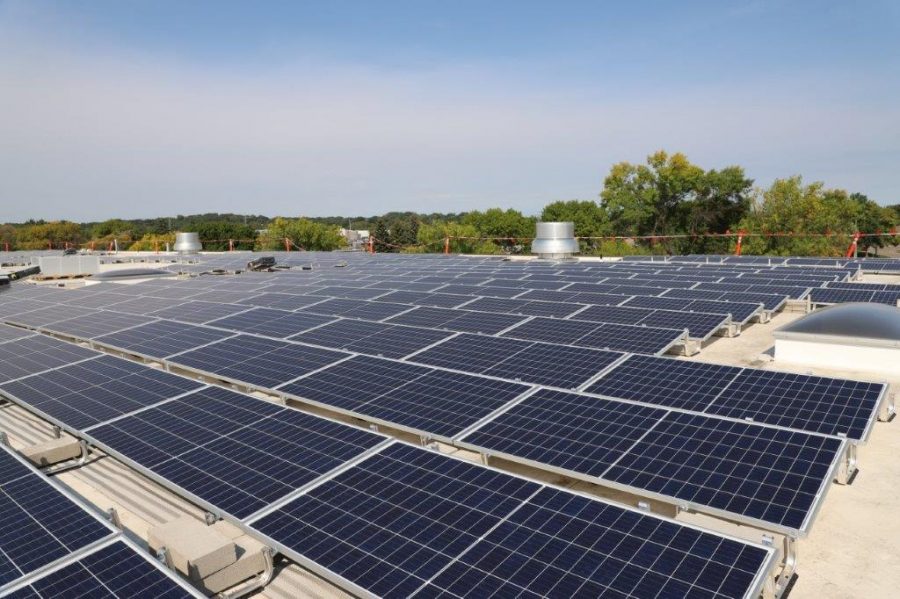 courtesy of The City of Edina

The City of Edina is making history by building the first ever city-hosted community solar garden located on top of the public works building in what’s known as “Industrial Edina.” To the city’s and Xcel Energy’s knowledge, it is the first ever community solar garden to have exclusively residential subscribers, composed of 68 households throughout Edina.

The idea of implementing a city-hosted community solar garden began in 2015 with Edina’s Energy and Environment Commission as the group was seeking to find ways to use renewable energy within the city. Considered a difficult task as most solar gardens are on large rural farms with ample ground space, the commission’s plan was eventually approved and moved to the working stages to work towards Edina’s goal to become a leader in renewable energy.

Edina city project workers Megan O’Hara and Tara Brown were introduced to the community solar garden project in 2016 because they worked closely with Minnesota Interfaith Power & Light (MIPL), an organization that partners with faith communities to address the climate crisis. Their main mission was to ensure that they were getting the information out about the community solar garden and to completely fill the garden with residential subscribers within a six month period to sign up for a 25 year contracted subscription. “At the end of the day, the solar garden would not have been created had we not had residents sign up to be subscribers,” Brown said. The owner and developer of the solar garden, Cooperative Energy Futures, could not have received financing from the banks and paid the cost of installation for 1,926 panels unless there was a commitment from the 68 households to confirm that they will pay their bill credit rates for 25 years.

Cooperative Energy Futures is an energy co-op that supports people owning their own energy resources, so they wanted to make solar power available to the most people whether they could afford panels on their homes or not. They are current investors in solar gardens all around the greater Minneapolis area. “Part of the beauty of this model is that it serves people no matter their income level because as long as you have an electric bill, no matter how small, you can offset the electricity costs by paying a similar amount to Cooperative Energy Futures,” O’Hara said. Electricity isn’t free, but by participating in a solar garden, it is less than it would be on an electric plan and more environmentally friendly.

Therefore, if a new family moves into a household that once was subscribed to the solar garden, new homeowners will not be liable for the 25-year contract the previous owners signed. The previous owners would have to pay a fine depending on the amount of energy they subscribed to, and the opportunity to subscribe would be available to the resident at the top of the waiting list.

The city heard from residents early in the process that they wanted Edina to be a leader in sustainable energy, making that the number one goal of the project. With the successful launch of the community solar garden that will start generating power in November 2018, the city is communicating with other cities about how they worked out the contract to lease the space on a previously unutilized city public works rooftop to generate renewable energy to keep within the city.

“As a regional leader, our next step within the city was to complete the SolSmart program, a process that is supported through the Department of Energy that has a third party come in to look at the process used to ensure that there are no hurdles that are put in place disabling a resident or business to get solar on their property,” Brown said. The city went through a building inspection in permitting process to ask themselves if they had any barriers.

A checklist was created to make it easy for residents and their contractor to understand and find success in the same process that Edina used to launch their own community solar garden. Part of the process includes connecting with the state because the state has the electrical code and reviews it, so the checklist is helpful in terms of bringing down costs. If a resident does follow all of the steps properly, their contractor may charge them to redo paperwork or repeat the process all over again. The city provides residents with the checklist right at hand, so that residents are not having to pay unnecessary fees.

Brown and her team had solar experts look at Edina’s ordinances and laws and found that there were only two sentences defining solar in the city’s overall ordinances. She went to the planning commission to share their findings as they fought to expand on official solar ordinances. “It is important that residents know what they can and cannot do with solar energy, and what their neighbors can and cannot do with solar energy,” Brown said. In a time of great change, there can be friction, so clarifying solar power ordinances will foster conversations about clean energy and ensure that this environmental change is communicated and implemented courteously.