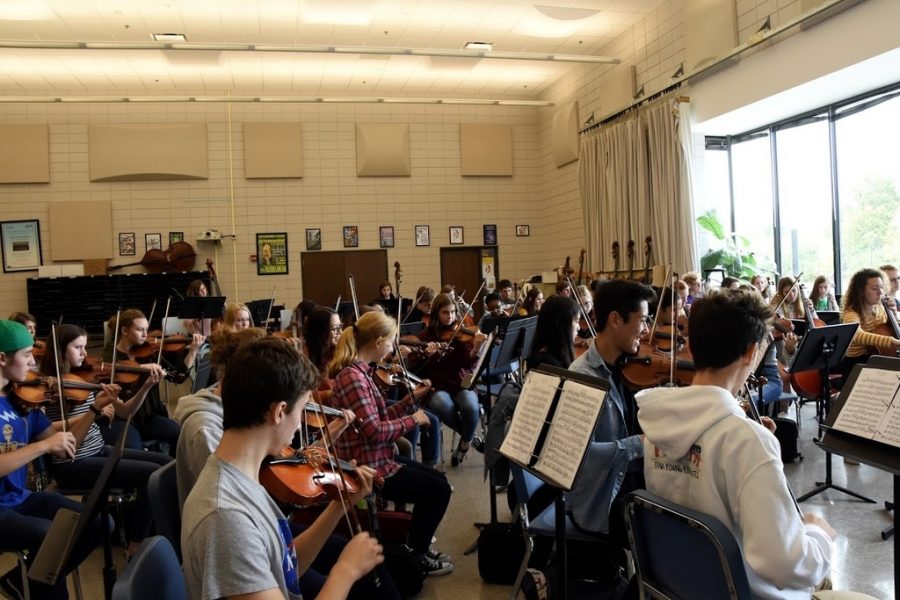 Last February, the Edina Concert Orchestra’s solo concert, the ‘Symphony Ball,’ featured music from both contemporary and traditional composers. This year, the orchestra has decided to completely reimagine the concert. The Symphony Ball isn’t just getting a new name, it’s getting an entirely new look and this time, it’s challenging the traditional view of what orchestra concerts should be.

The new concert will be called ‘Coachello’ and will occur around the end of April. “I think it’s a great name, I think it’s fun. Coachella is a popular music festival and the pun of Coachello is pretty hilarious and the name kind of stuck out,” orchestra director Nicholas Gaudette said. The name change isn’t just meant to be cosmetic; it’s also meant to change the perspective of the Edina Orchestra Program itself. “I feel like the Symphony Ball seems really professional and for an older audience,” Orchestra Council President senior Sarah Collier said. “Whereas we’re going try to show [with Coachello] how orchestra can be for everyone and for really young people. It’s not all about classical music, it can be about expressing yourself in other ways.”

An important change Gaudette has made for this concert is easing himself out of the narrative. He plans to back away from the traditional conductor position and let the orchestra students run the concert. “I’m really interested [in] having students bring their own ideas, conduct their own groups, and maybe do their own arrangements if they want,” Gaudette said. “My hope is that it’s all student led. So that all I would do is sit there and let it happen or assist from the sidelines if I needed to.”

Running Coachello is now the responsibility of the Orchestra Council, headed by Collier. “I think it’s going to be a bit of a challenge,” Collier said. “I feel like it’ll be the best way for us as [the council] to connect with students because we know, as students, what other students want to hear and what they want to see.” According to Collier, the first step will be to determine the theme of this year’s concert, just like the EHS Concert Band’s annual Pops Concert. Once the theme is decided, the council will host auditions for solo and ensemble acts. “We’re probably going to be doing a few group performances as well as the whole orchestra,” Collier said. “It’s going to be a way for students to express how they think orchestra should be viewed.”

As for the type of music played at the Coachello concert, the genre will be mainly popular music. “Although the Symphony Ball did play some more modern music, we’re going to focus on some more popular songs. [Songs that are] more in just that moment than the classic overall sense,” Collier said. They also plan to feature student arrangements and possibly student compositions as well.

Coachello will occur at a later date than the Symphony Ball and at a different location. Previously, Gaudette had reserved Fick Auditorium for the concert. Now, Coachello will be taking place right outside EHS, staying true to the concert’s namesake. The Orchestra Council plans to run it as a casual, open air, come-and-go type concert. This will allow you to listen to the songs or ensembles you want to hear rather than sitting in a stuffy auditorium for a solid two hours. “It will be something that no one has ever seen the orchestra do,” Gaudette said.

If you want to get involved but you’re not in orchestra, email Gaudette or talk to him for more information or opportunities. “Orchestra’s going to be really cool this year,” Collier said. “Get pumped, Coachello’s going to be awesome.”