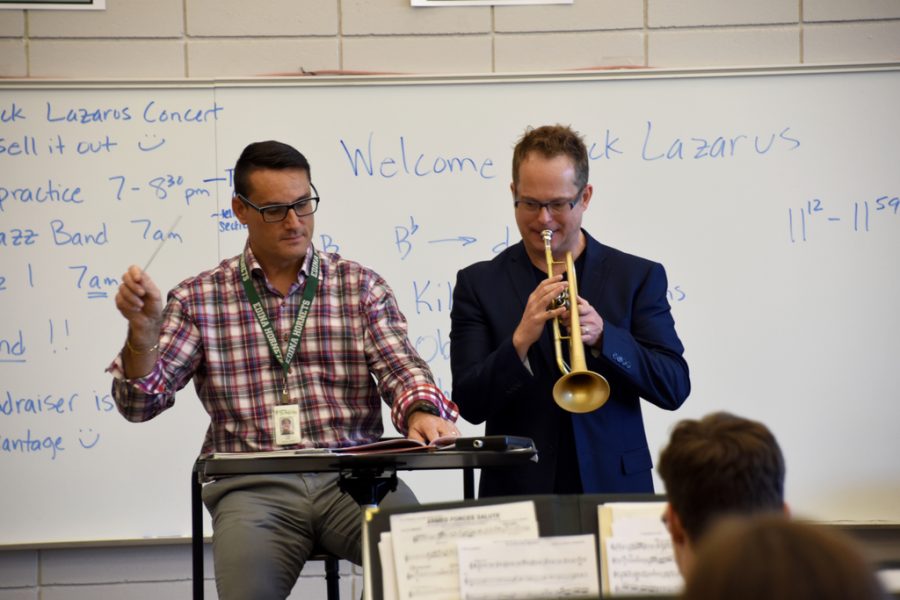 On Oct. 30, Edina students will have the opportunity to learn from and listen to a wildly accomplished musician. World renowned trumpeter and Minnesota Orchestra member Charles Lazarus will be performing with the Edina High School Concert Band. The concert will take place in Fick Auditorium, and consist of some pieces that Lazarus has composed, including ‘Kilauea’s Fountains,’ and some other well-known pieces such as ‘Oblivion’ by Astor Piazzolla.

After debuting at Carnegie Hall at the age of 19, the international music community quickly recognized Lazarus. He transferring to a music college for his last two years of high school and was able to take advantage of many opportunities early on because of his dedication to practice. He attended North Carolina School of the Arts and went on to graduate from Juilliard, where he was a part of several jazz ensembles and orchestras. In the past he has been a part of many well-known groups including the world-renowned Canadian Brass. Currently, he collaborates with many high school bands and performs his own compositions around the world.

The Edina Band program officially met Lazarus shortly before the concert through a continuous fundraising program that he conducts with high schools across the United States. High school band director Paul Kile, along with some other band students, sold iTunes gift cards that provided tracks of Lazarus’ most recent composition in an effort to raise money for the band program. Shortly after the fundraiser, Lazarus and Kile decided that it would be a great idea to collaborate on the Edina Concert Band’s Fall Concert.

Over the years, Lazarus has been a part of the Edina Band community, collaborating with music classes during May Term and visiting students during the school year. However, Kile maintains that this concert will be an important and exciting opportunity for students. “This won’t be the first time that the students will have a chance to connect with him, but this will probably be the only Chuck Lazarus concert that we do,” Kile said.

Lazarus’ first rehearsal with the Concert Band was on Oct. 16, only a couple of weeks before the concert. However before this rehearsal, the band had been practicing the concert music for quite some time. “The biggest challenge for this concert is intricacy of the arrangements. These are college level musical arrangements and the Edina High School band is rising to the challenge,” Lazarus said.

During the concert, the audience will hear two intricate concertos (solo pieces with the accompaniment of an ensemble), a trumpet trio, and several band features. The concertos pose a challenge to the band, as they require the band to play quietly while Lazarus projects his solo part. According to the Concert Band’s Principal Trumpet Jackson Lomax, “It will be pretty challenging, with such a big band, to stay under [Lazarus’] solo.” Lazarus was pleased after meeting with the band students, describing them as “Groovy, fun, and inspiring.” As a teacher and former band student, Lazarus enjoys working with aspiring musicians and music enthusiasts. In his opinion, the most important thing to do is practice music efficiently. “Practice wisely and work hard,” Lazarus said.

Lazarus’ collaboration with the Edina Concert Band will be both an enriching educational experience for the students and an exciting opportunity for the Edina community to hear a well-known musician in their own backyard. “I think we are very fortunate that a guy as busy and as world renowned as [Lazarus] can work with us, but I’m not going to look a gift horse in the mouth,” Kile said.

For more information on attending the concert and buying tickets, visit the Band’s website or their Facebook page. Additionally, the Concert Band will be selling tracks of Chuck Lazarus during the concert and until Nov. 13 as a part of their fundraising program.