English teacher Jon Buckley began his journey with son Nathan on Oct. 30, 2008. Just three years old at the time, Nathan was diagnosed with Type 1 Diabetes after experiencing many symptoms such as vomiting and having to go to the bathroom frequently. Arriving at the hospital with a blood sugar level of over 500 (normal levels range from around 80 to 120), Nathan’s diagnosis was a “complete and utter shock” to Buckley and his wife, Sarah. Not knowing what Type 1 really meant, Buckley and his family then proceeded to learn that night that the illness was an auto-immune disease that occurs when a person’s insulin-producing cells are attacked (insulin being the hormone a body uses to break down sugars), and with no known cause. Unlike Type 2, where a change in diet or even a pill can be taken to regulate the blood sugar levels, drastic changes were going to have to occur for Nathan and his family. 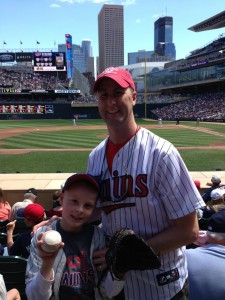 Since that day, Nathan’s daily routine was forever altered. Everyday, he must check his blood sugar levels over ten times – which equals over 4,000 times a year. He wears an insulin pump, which delivers insulin to break down sugar in his food, without which he could die, and a continuous glucose pump, which measures his blood sugar levels throughout the day. Attending third grade at Highland Elementary School in Apple Valley, Nathan visits the school nurse Amy several times a day, including when he first arrives at school, before lunch, and at various other times during the day when he experiences a low or high. If his levels are high, he must correct himself, if they are low, he drinks a juice box or another item high in the necessary sugars. Before any meal, he balances his levels and Buckley and his wife must check his levels two to four times every night.

Despite his complicated daily routine, Nathan is an extremely lively nine-year-old, and never lets diabetes slow him down. Playing basketball, baseball, and football, he loves to stay active, making sure to load up on carbohydrates before every game.

Over the past five years, Buckley and his family have dealt with a lot. Having diabetes requires constant maintenance, and the smallest changes can upset such a delicate balance. Three years ago, Nathan actually experienced a seizure because his sugars were at such a severe low.

Dealing with these challenges has been very difficult for Buckley and his family, though the support he has received here at Edina has helped him enormously. The very first night at the hospital when he received his son’s diagnosis, Mr. Jensen, a teacher at Valley View Middle School, came to visit the family, as his son also has Type 1 diabetes. Since Buckley arrived at the high school, he and Ms. Kampf, a social studies teacher at EHS and a diabetes patient, have gotten together once a month for lunch to support each other. Upon hearing of Nathan’s diabetes, Sydney Domke, a former student at EHS who also has Type 1, put together several supplies including juice boxes and candy for Nathan in a dinosaur backpack, appropriately named “Dino.” This backpack was carried around on Nathan’s back for over three years, symbolizing the incredible support Buckley and his family were able to find among the citizens of Edina.

“February is his favorite month because he feels like he is supported,” Nathan’s teacher said of her student, and there is no question as to why that is. For the past five years, Buckley and his family and friends have participated in the Walk to Cure Diabetes, an annual event occurring Feb. 22 and generating millions of dollars to help find a cure for Type 1 diabetes as quickly as possible. Over 20,000 people participate in this event, sponsored by the JDRF organization, which is a global leader in funding Type 1 diabetes research. The walk takes place at the Mall of America and is the largest JDRF walk nationwide, raising over $2 million every year. TEAM NATHAN is a group composed of over 250 of “family, friends, coworkers, and other important people who support Nathan,” as stated in the team’s Walk Letter, and has raised over $32,000 for the walk in its past five years of participating. This year, the team hopes to raise $8,000 for the walk so as to reach $40K for their grand total. 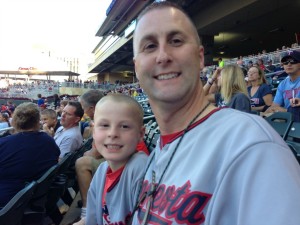 Buckley first heard about the walk through the organization JDRF, as they gave Nathan a “Bag of Hope” upon first hearing of his diagnosis, which is a backpack filled with diabetes supplies and educational materials for Nathan and his parents about his diabetes. Every year, Buckley chairs the Family Team Committee for the walk and puts together letters, videos, and designs t-shirts for the event.

Nathan has always been encouraged by his parents to never let diabetes define him. “We want him to take an active role in supporting others and finding the cure,” said Buckley. Camp Needle Point in Hudson, WI, a program for kids with diabetes, has also been a source of support for Nathan and four years ago, he was the youth ambassador and face of the walk. He and his family do their best every year to stay positive and to make a difference.

Over twenty-five million Americans are living with diabetes. Check out the above video to learn how Edina High School staff and students deal with diabetes.

Junior Ellie Kohner talks about her experience with Type 1 Diabetes.

Zephyrus: When were you diagnosed with Type 1?

Ellie Kohner: I was diagnosed in January when I was in second grade, I think it was 2006.

Z: What were you thinking when you found out?

E.K.: I didn’t really understand it at first, I remember I asked when it was going to go away and the doctors said, “Oh, it’s not, you’re going to have this for the rest of your life.” And it kinda took me a while to understand it because I was only in second grade.

Z: Describe a day in your life and how the diabetes affects it.

E.K.: Usually I wake up and I have to test my blood sugar right away and depending on if it’s high or low I give insulin right away or wait until I eat. Then I give insulin again right before I eat something and then I do that again at lunch and dinner and if I eat a snack.

Z: Have you had any health scares?

E.K.: No, I’ve never been to the hospital and I’ve never had to give myself the glucagon shot. If you faint if your blood sugar gets really low, they give it to you and it’s like a sugar shot.

Z: Is your diet restricted at all?

Z: How do you know something is wrong with your body?

Z: What should people know about diabetes?

E.K.: There’s not anything you really do to get it, it just kind of comes and when you find out, it’s not the end of the world, it’s okay, and it doesn’t make you different than anyone else.

Z: Where do you find support in your life?

E.K.: From the nurses upstairs, I talk to them a lot and there’s this support group at the clinic I go to, it’s Park Nicollet. And other kids that have diabetes: I have a friend who’s a freshman and I’ve known her since elementary school.