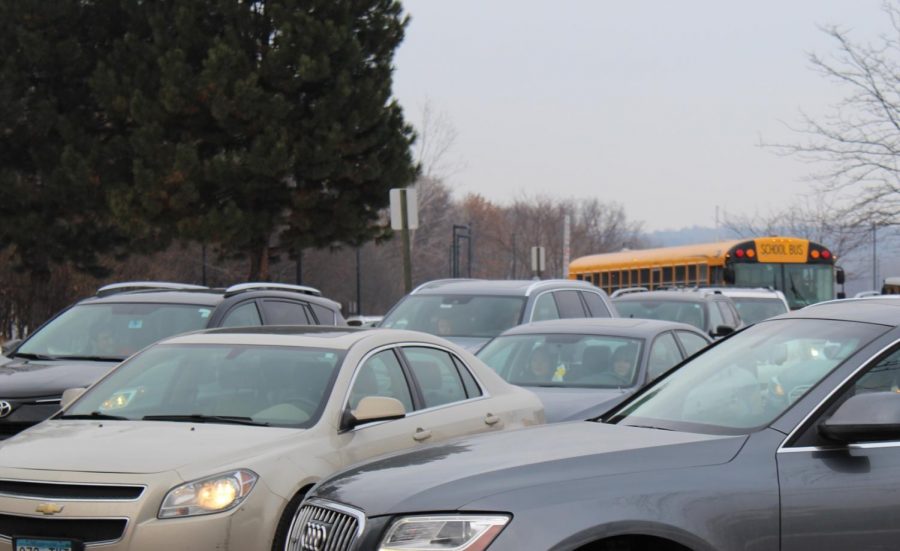 The Edina High School parking lot is notorious among students for daily occurrences of road rage and reckless driving. Students have resorted to leaving class early, hiding out in the bathroom until the end of seventh period, and sprinting through the halls after the bell rings to reach their cars before the lot gets too crowded. “When people are leaving the school it gets really backed up and people are getting hectic and it takes so long to get out,” senior Haley Kellenberger said.

The rowdy nature of the crowded parking lot is most well-known to students. Outsiders driving past EHS are not accustomed to the rough driving in the lot, and therefore, most crashes that occur are often between a student and an outsider. “I think what happens is that people from the school are used to the traffic and how it works, and if you’re somebody from the general public that’s just driving past, you’re kind of coming into a big traffic jam and don’t know how exactly it works or what to expect,” Security officer Jodey Erickson said.

EHS students were reminded of the instance of a large crash just last month when a car ran into a residential fence on the upper EHS lot. The instance involved a parent driving by the school, Jeff Marshall, Dean of Students confirmed. “It was only an adult who was leaving the parking lot at the time. There was just some confusion about direction, about where to go. The police came and 911 was called.  The eastbound lane of Valley View was closed, because of the emergency,” Marshall said.

To try and improve the hazardous situation, the administration has added a third staff member to help direct traffic and a few more security cameras facing the parking lot. “We added some speed bumps over the summer to slow cars down. We also extended the right-turn lane out of Valley View,” Marshall said.

However, Some students argue that it is still not enough. “There could be more done to let us out easier and find another way out of the parking lot,” Kellenberger said.

In addition, the security cameras do not face the street and only catch accidents near the building. “There’s nothing specifically there to monitor traffic or accidents,” Erickson. “It’s all monitoring the parking lot, and you might catch some stuff in the distance.” Because of the location of the camera, some accidents may not be caught if they aren’t close to the building itself. The cameras do not face the roads connecting the Valley View and the EHS parking lots, so crashes are not caught if they happen in that area.

Because of the lack of monitoring away from the parking lot, some crashes may not be visible. Senior Sadie Urie experienced this firsthand when her car was hit while she was participating in an after-school club. “[The crash] happened directly after school in the EPAC parking lot but I wasn’t there because of Model UN. I didn’t notice until the next day. The person who hit my car didn’t leave a note or anything so I had no idea who did it. I went to the administration a week later and they let me talk to the security who asked me questions about when, where, my car, etc. and looked at the security footage. The cameras were too far away though so they couldn’t see anything. The administration was nice, but nothing really happened because they couldn’t do anything,” Urie said.

The administration has increased security measures as a result of the multiple crashes, but it is in the student’s best interest to maintain vigilance throughout the parking lot as some of the security tactics may not be effective.