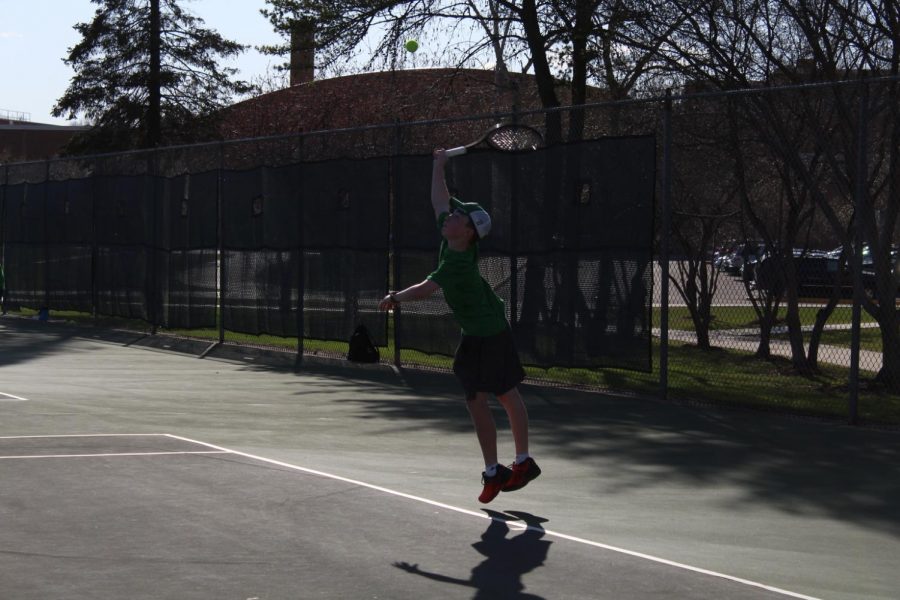 With eight state team titles and coaches that have over 50 years of combined experience, the Edina Boys’ Tennis team has gained statewide prestige. Along with their state titles in team, individual, and doubles events, the team has won 15 Lake Conference Championships, a product of both the cohesive chemistry within the team and the distinguished coaching.

Gary Aasen, the head coach of the varsity team, is native to Minnesota and has coached the Edina Boys’ Tennis team for 25 years. “Like the players that I’m coaching at Edina now, I played [in high school] and I played in [United States Tennis Association] tournaments. I played college tennis, coached a little bit in college, and obviously I’ve coached high school for a lot of years,” Aasen said.

Similarly, senior team member Joey Joas began playing tennis at the Interlachen Country Club when he was four years old, and started playing competitively at 11. “I [have] had the most fun with [tennis]. At first, it was just something that I did in the summer, but then I decided that it was a passion of mine,” Joas said. With this school year being his third and final year on the team, Joas’ extensive tennis experience has earned him the title of team captain.

Although the high school season only runs for a couple of months during the spring, it’s common for Edina Boys’ Tennis players to continue their rigorous practices throughout the off-season. “During the off-season, pretty much our whole team practices together, so I’m with all my high school teammates and friends. During the winter, we all play together indoors at Life Time [Fitness], which helps us push each other and get to know each other,” Joas said.

This year, a unique quality of the team is the amount of younger players on varsity. “[Good tennis players] compete and practice all the time, non-stop. We have eighth graders, ninth graders, and tenth graders in varsity that compete in starting positions because they’re so talented. They’ve been playing since they were younger and practice for six or seven hours a week,” Joas said.

The unusual number of younger players on the varsity team has changed the team dynamic, including how Aasen coaches the team. “You just have to be a little more understanding that they don’t have as much experience in school sports. The good thing is that they play a lot of tennis; the downside is that they’re learning those new things like playing a big match for their school,” Aasen said.

However, the merit-based rather than age-based system of tennis tryouts has heightened the team’s performance. With only ten kids who compete in each match, the lineup must be carefully chosen according to each tournament, a demand that differs from some other team sports. “We have 18 kids right now in varsity, but only 10 play, so it’s super competitive because there’s a fixed amount of people you play with,” Joas said.

For Aasen, some spots in the doubles and singles lineups are “locked in,” but change according to who the team’s opponents are. “Sometimes if another team is really strong in singles [or doubles], then we try to match up with them and put better guys in our [lineup]. This team is unusual because we’ve got a lot of guys that are super close to each other in terms of level,” Aasen said.

During the high school season, each practice is even more substantial than the last with targeted group drills on techniques like serving, volleying, groundstroke, and backhand/forehand. A typical varsity practice begins with a 20 to 30 minute section of conditioning or technical stroke work, and then the team will start drills where doubles and singles players may practice the specific areas they need to work on. Players will play games against each other, and at the end of practice, the team will do some rendition of a contest where they try to outscore their opponent. “They’re great practicers, so they love to play. It doesn’t matter what the format is, they do love playing a lot. If they could after practice, they would go practice again,” Aasen said.

However, because tennis is a physically and mentally demanding sport, players often face mental blocks or even severe injuries. “I had a really bad soldier injury from playing in so many tournaments. I couldn’t even lift my hand above my head so I had to go to [physical therapy] for a while,” Joas said.

Despite such setbacks, seeing the positives of taking breaks from tennis make players even more determined. “Even though it was hard to step away for a few weeks at a time and even a month here and there, it makes you hungrier to play and win which shows later on,” Joas said.

Although tennis is a demanding and competitive sport, the chemistry within the team has created a space for Edina Boys’ Tennis players to make lasting memories with each other. “My best memory is probably making the team because I worked so hard during the off-season. The [coaches] see the effort and positivity and that’s how you have good chemistry with everyone on the team,” Joas said.

As for the future, Joas plans on playing intramural club tennis in college and Aasen plans to continue the strong nature of the team. “[I’ve learned] to enjoy the moment with the kids. There are going to be ups and down and you’re going to have to ride that roller coaster. I think that sports are super important at Edina, so there’s a good tradition and history there. The players know that and really enjoy it,” Aasen said.