Behind closed glass doors: The hidden reality of the K-Pop industry 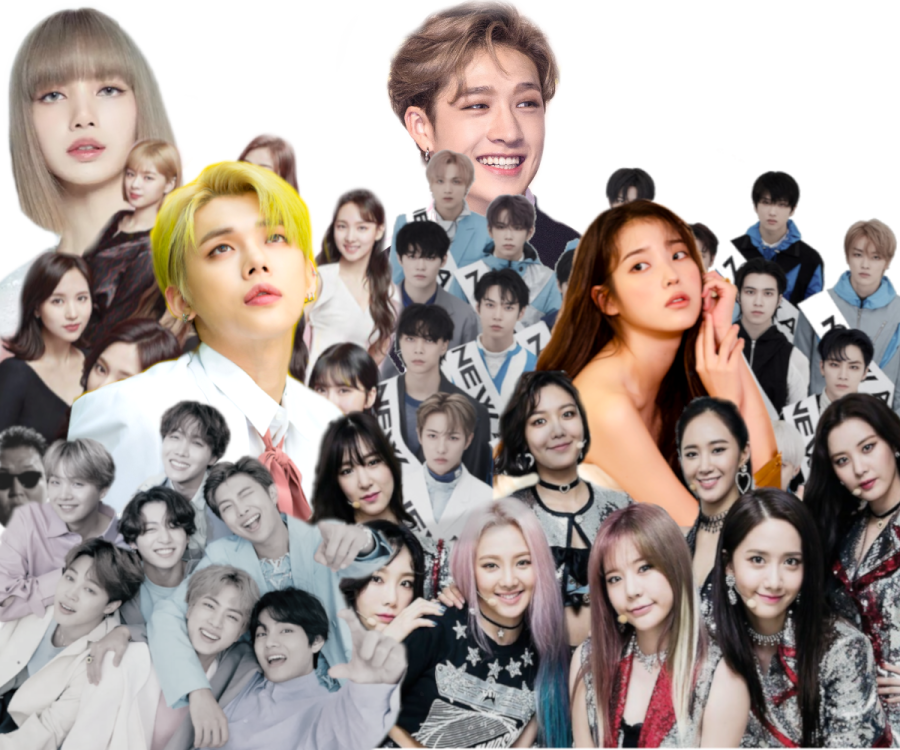 For years, the K-pop industry has been known for its various genres of music and performers, allowing it to amass fans of all backgrounds and shower them with joy.

For years, the K-pop industry has been known for its various genres of music and performers, allowing it to amass fans of all backgrounds and shower them with joy. Idols are the medium between their fans and their music; their seemingly perfect and unique personalities, talents, and looks hook listeners in. However, companies’ success comes at the expense of idols and is exacerbated by fans, which means both parties aren’t free from blame.

In the western music industry, artists can do and say just about anything without limitation. Twitter is their sacred space to relay their problematic opinions and emotional outbursts. No need to worry about the backlash! Artists employ social media tactics to promote their latest works; by being vocal—and oftentimes controversial—they generate attention which fuels their success, regardless of whether the attention is positive or negative.

In contrast to the limitless actions western artists possess, K-pop idols have few of these liberties. No dating, no parties, and certainly no individual Twitter accounts. Through this strict monitoring, they are shined, brushed, and primed to appear like flawless people to attract devoted fans; thus the name “idol.”

The root of this contrast lies in the opposing cultures of the two industries. The US has some of the most influence on the global music industry, as the music developed from Black communities, like soul, hip-hop, and jazz-inspired the rise of K-pop. American tradition involves letting loose and allowing your words, thoughts, and actions to run wild. On the other hand, modesty and proper etiquette are vital aspects of Korean culture, contrasting with the more laid-back style of western artists. With this, there is also a standard to have fair skin, which results in many idols using skin-whitening products that produce monumental side effects.

The internal dynamics of the K-pop industry are not the only forces keeping them in check; appealing to fans is the key to developing a loyal and expanding fanbase. K-pop idols must strictly maintain their outward personas: more energetic performances, stellar vocals, and likable characters translate to more streams, merchandise/albums bought, and tickets sold.

Unfortunately, to reach such perfect appearances and attract fans, plenty of work is required. Dieting, singing, dancing, variety shows, photoshoots, training, and more. Want to get a good amount of sleep? Out of the question! Along with the pressures of appealing to domestic and international fans (who will have varying values, like mentioned above), completing these tasks become impossible and all have failed to adhere to these standards, whether consumers know it or not. Completing all of these tasks several days of the week takes a toll on the idols, which their fans can clearly see.

All idols are overworked by their companies, but many fans have advocated for girl group TWICE as they believe their company, JYP Entertainment, doesn’t let the stars rest. TWICE was having back-to-back comebacks, intense preparation for everyone. This year alone, the girls had an online concert, released three singles, two mini-albums, and one full-length album.

“I do wish that companies would realize when they are making mistakes such as pushing their idols too far,” Zweber said. “Having too many comebacks  (new releases of music accompanied by performances and variety shows) in a row…pushing their idols to extremes that they can’t keep up with.”

Adhering to strict standards is another way to appear pleasing—keeping their bodies slim is one of the most important visual aspects companies and fans care about. Again, because of cultural differences between South Korean and international fans, domestic fans are often the ones to comment on even the slightest bloating of an idol’s cheeks. Idols themselves feel burdened to follow extremely unhealthy diet routines to prevent any sort of weight gain. Hours of dancing practice with an improper amount of food make a rather destructive combination.

A female solo artist, IU, had succumbed to the stress of maintaining a thin frame, leading to her creating an infamous diet plan. The mounting pressures started to limit her as she developed eating disorders that ruined her state of mind; although, with help, IU was able to work on fixing the negative habits she possessed and live her life joyfully.

Another idol, Yeonjun of Tomorrow X Together (TXT), was frequently seen on many VLives (a service where idols can go live and interact with fans) reading comments about his weight and feeling visibly upset because of them. On a VLive named “Choi 3,” Yeonjun reads a comment saying “Yeonjun, you’re fat!” Having come across many comments like this before, he simply responds “No, I’m not.”

Because K-pop companies are consistently trying to spread their artists globally, you would think that groups and their higher-ups would try to avoid offending international fans. But what do you know…it happens quite a lot! It’s incredibly unusual to be able to go through your week without hearing about some egregious act your idol performed on camera with no apparent remorse. The mass of n-slur scandals is extraordinary!

A prime example is when Giselle of Aespa, got “carried away” when artist SZA’s “Love Galore” played in the background, proceeded to sing a line of the song, slur and all.

Then, in 3Racha’s song (sub-unit of Stray Kids) “+.-,” member Bang Chan sang, “when the real ninjas die, fake ninjas gon’ multiply,” mirroring a lyric in “Multiply” by A$AP Rocky; the only change being the word ‘ninja’ substituted for the n-slur. Though many Black fans showed noticeable disdain for this line, Bang Chan defended his word choice later in a song titled “P.A.C.E.”: “I said ninjas fam, I think you misheard, cause I represent and I show respect to all people in the whole world.”

More broadly in the realm of racism, RM of BTS has had quite a stifling history with wanting to acquire Black traits. He permed his hair to the texture that is only prevalent among Black people, wore dreads, and said on a variety show that his talent was “talking Black.”

Skipping hand-in-hand with racism is its best friend, cultural appropriation. From braids to disrespecting Desi culture, K-Pop idols have just about done it all.

Additionally, a theme apparent in a lot of concepts of hip-hop songs seems to be linked to appropriating Black culture for the aesthetic. In other instances and seen in promotion photos for “MONEY” by Lisa, the BLACKPINK member has sported Black braiding styles. The group has also donned many Desi accessories repeatedly without apology.

Further, a handful of idols have appropriated traditional Native American headdresses, and one wore stereotypical Native clothing for a Halloween celebration.

Typically, when their wrongdoings are denounced by fans, the majority fail to take any accountability and apologize, whether their company prohibits them from doing so or not. Some even repeat their actions; Wendy of Red Velvet imitated a blaccent (imitation of the dialect AAVE that many African Americans use) a second time even after apologizing for her first instance of disrespect.

Without a doubt, fans aren’t safe from critique either. Because of widespread and varied fanbases, it can be difficult to accurately tell what the majority feel regarding their idols’ treatment and actions; both sides of the coin reveal in every situation (check out the r/UnpopularKPopOpinions sub-Reddit if you desire to enter a rabbit hole of fans’ stances on heavily debated topics).

Typically, fans, especially international ones, are sympathetic towards their favorite idols and hate to see them uncomfortable and suffering. Mark of NCT, an idol adored for his rapping skills and humorous personality, is debated over whether he is overworked or not. Mark participating in three subunits and a cumulative group under his company worries part of his fandom, while others notice that Mark seems to have a lot of free time on his hands. Yet, others argue that Mark has too much on his plate and has no time to rest. However, this is solely speculation due to the barrier between fans and the camera.

In Yeonjun’s case mentioned above, countless fans, both Korean and international, shamed the commenter for their unneeded words. And then, there are individuals on the same judgemental par of the companies: at a concert, one of the audience members yelled that IU had gained weight, which was quickly countered by another who defended the idol.

Some think that it is inappropriate to discuss an idol’s body at all.

“The fans continue to harass [them]: ‘Oh, you’re too skinny,’” sophomore Ilham Ahmed said. “I feel like it brings a bunch of body shaming [and] opens doors for body shaming.”

The negative aspect of the industry that impacts the fans most severely is the stark racism and cultural appropriation. Many a time fan bases have expressed their hurt over the depreciation of their cultural staples, but idols and companies continue to turn a blind eye to mass emails alerting them of their missteps. Both sides of the opposition are adamant about their views; offended fans express their disappointment and want apologies. However, others unimpacted by derogatory words or actions often try to lower the severity of the event and try to move on.

“Other people that aren’t in the fandom will [hold them accountable] because there are a lot of fans that don’t want to accept that their idol is being racist,” Ahmed said.

Well, what’s the point? And, yes, this does end with a lesson; like mentioned at the beginning, consumers are the driving force of any industry—certainly for the K-Pop industry. Don’t fret, this was not a long, abrasive essay to discourage you from ever pressing play and jacking up the volume on “HOME” by BTS ever again. It’s part of a larger issue regarding society’s struggle with consumerism and ethics.

Whatever individuals consume and support will always benefit the original creators, whether you obtain it through regular means or not. However, it’s essential to balance this caution with our inherent need for entertainment; this is called “separating art from the artist.” Big eye roll. Liking the music a group puts out, but condemning their actions you don’t agree with is valid. Just like how critiquing someone’s work is valid because it is not their character you are commenting on.

Though the concept can seem unattainable, with enough people (or enough connections), you can hold your idols accountable for their actions, especially when they affect you personally. Sometimes mass emailing, posting on public forums that groups and companies have accounts on, or telling them in person can warrant them to learn from their actions. Hopefully, over time, the industry will realize that respecting people of all backgrounds is helpful to globalization.