‘Beautiful: The Carole King Musical’ supplies the music, but lacks the energy 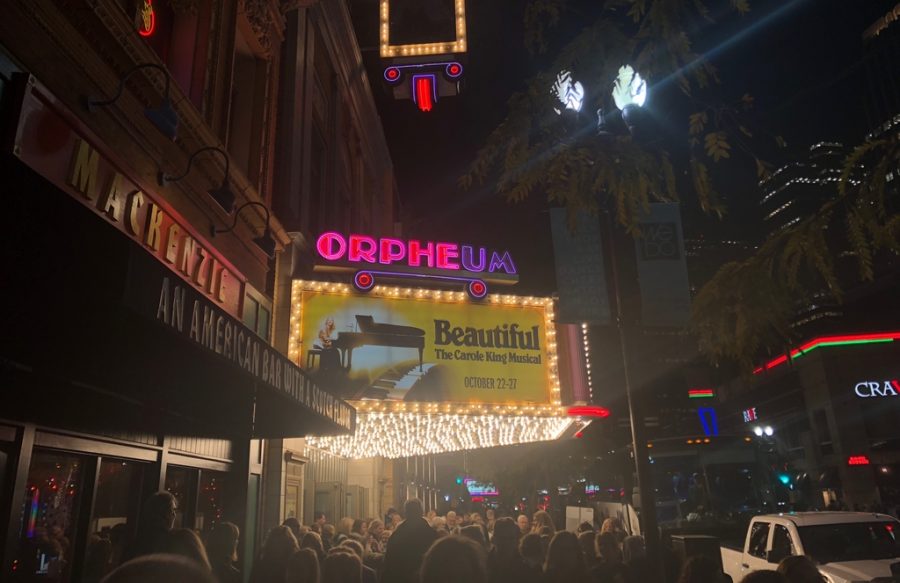 ‘Beautiful: The Carole King Musical’ is a biographical musical that tells the story of renowned singer-songwriter, Carole King. The jukebox musical features songs from King, as well as top hits from the 60s and 70s. The show opened on Broadway in 2014 and was the winner of two Tony Awards; including Best Sound Design and Best Leading Actress in a Musical. Since then, the musical has had two North American tours, a production in London’s West End, and a UK tour. ‘Beautiful’ has returned to play at the Orpheum Theatre in Minneapolis from Oct. 23 to 27.

The musical opens with King’s first concert which took place at Carnegie Hall in 1971, as King (Sarah Brockel) introduces herself and explains how she got her start in music. The show then flashes back to a younger and spirited 16-year-old King as she attempts to break out into the rapid-paced music scene during the early 60s. She soon meets Gerry Goffin (Dylan Wallach) who became her songwriting partner and later, her husband. The dynamic duo writes hit after hit, producing more than two dozen chart topping songs throughout their partnership together, including ‘Some Kind of Wonderful,’ ‘The Locomotion,’ and ‘Will You Love Me Tomorrow.’ King and Goffin become close friends with another songwriter duo, Barry Mann (Jacob Heimer) and Cynthia Weil (Alison Whitehurst). However, industry pressure and relationship struggles soon prove too much for King and Goffin, resulting in a divorce and the talented writers part ways. The musical concludes with King’s individual successes as she transfers from a songwrite to a singer-songwriter sensation in the early 1970s; closing with King’s Carnegie Hall concert, as she reflects on her what has become of her career so far.

Bockel has a fierce belt, Brooklyn accent, and King’s earthy voice as she shows sparks of King’s spirited personality and fierceness throughout the beginning of the show. However, this fierceness is obscured by Bockel’s tendency to overemphasize King’s down-to-earth-qualities and conflicted emotions, which comes across as timid and frumpy as her personal struggles draw out into the second act. King’s infectious energy and charisma finally emerge in Bockel towards the very end of the show, when she records and performs her own songs, finding success and happiness from music again. Wallach is convincing as Goffin, but he comes across as one-dimensional during dialogue heavy scenes and the depth of his character only emerges during moments of conflict or certain songs.

Like most jukebox musicals, the plot of the show is fast-paced. In the first act, the show is jam packed with musical numbers that heavily outweigh the dialogue. Theatergoers from the Baby Boomer generation and Generation X will enjoy the performances of hit songs from the 60s, while younger generations will recognize and enjoy songs from King’s best selling individual album, Tapestry at the end of the second act. Though uncommon at the Orpheum Theater, the opening night show was unfortunately plagued with sound issues: microphones cut out and ensemble members were drowned out by the talented, but too loud orchestrations, which made for a frustrating viewing of the show.

‘Beautiful’ does an excellent job showing off King’s successes, as both a singer and songwriter, as well as the music industry during the 60s and early 70s. Fans of King’s music will enjoy the musical, but the rest of the show lacks what King is well known for, personality and energy.