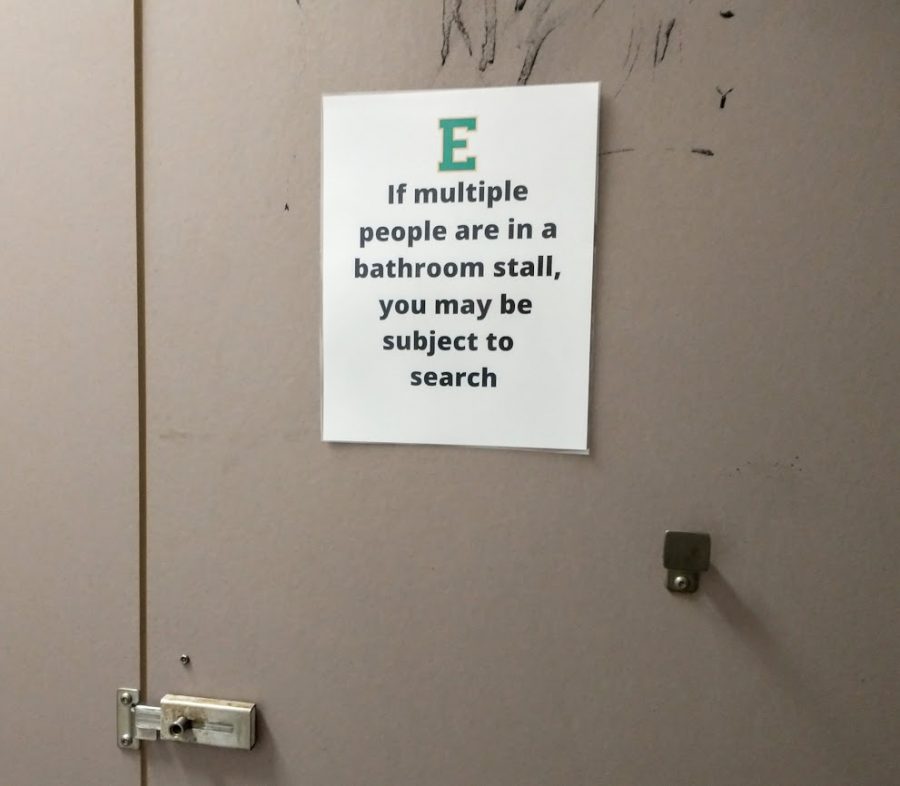 Bathroom loitering is a schoolwide problem that has caused administration to take necessary actions in order to prevent the activity.

Bathroom loitering is a schoolwide problem that has caused administration to take necessary actions in order to prevent the activity. Some students have been found doing especially destructive actions in the bathroom like destroying property and vaping. This brings up two sides of a controversial argument: whether requiring students to do a mandatory search is a violation of civil liberty or not.

Students who ask to use the bathroom to avoid class may be frowned upon, but in reality, there’s usually a good reason for students to leave the classroom. Whether it’s the familiar feeling of stress or the unpleasantness of the environment, students leave either because they need a mental or social break.

“Our stamina is a lot lower than last year, we are working harder this year than we have during the pandemic and we have to be engaged for longer,” English teacher Jessica Edeburn said. Teachers understand this and try to provide breaks for students in their classes, but many cannot provide more than a short pause due to necessary course plans along with a school policy prohibiting breaks on block days.

While student reasoning is understandable, loitering can have a direct impact on a student’s academic life. When students miss instructions due to loitering, they fall behind, encouraging them to take more breaks and creating a vicious cycle. This also brings up the concern of wellness, as some directly connect their academics to their mental health.

“The more you engage in class, the easier class gets, so sticking around for the hard parts stops being so scary,” Edeburn said. She feels that it’s vital for students to know that teachers care and understand—they want what’s best for their students and that includes trying to show them that their uneasiness can be reduced by distributing their work and participating in class.

As students are aware, many classrooms have rules such as allowing only one person to use the bathroom at a time—which is necessary, but when a student with good reason to leave is stuck behind a loiterer, problems begin to arise.

This is a complicated problem that may seem like the rule’s fault, but this is where students should be willing to take accountability. While there’s no easy solution for this, it’s important to realize how students’ actions can not only affect themselves but also the people around them.

Among the school, the topic of safety is often discussed as one of the top priorities and while the safety of students is very important, there have been searches forced on students, some of whom did nothing wrong. In the cases of random searches, this could be seen as a violation of civil liberty and cause inconveniences among students. In addition, it adds a layer of uneasiness and implies a lack of trust in the school faculty which creates an overall more negative environment.

While there are many solutions proposed, the biggest fault arises with the communication between students and teachers. Many students believe that teachers are simply cold without processing the reasoning behind rules and ignoring the fault within the student population. Students who loiter end up leaving their teachers wondering why they are leaving and questioning their safety, which is the biggest concern when it comes to students lingering in hallways/bathrooms. Accountability and good clear communication between students and faculty is imperative when solving such a convoluted problem.