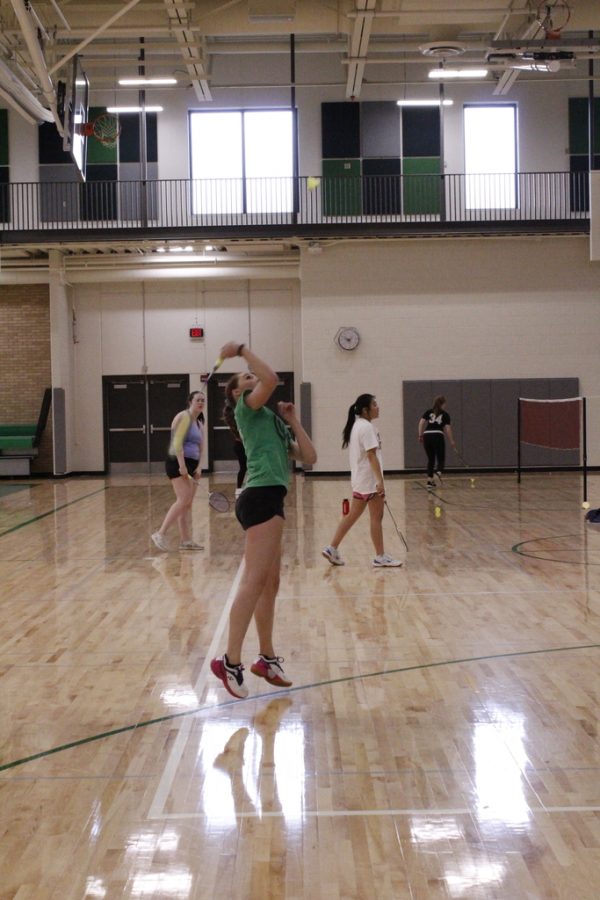 Although badminton is seen as an individual sport by many people, players on the Edina Girls’ Badminton Team are brought together by teamwork. The Girls’ Badminton’s eighth season at Edina High School started in March this year. With all new coaching and captains this year, the team had to adjust to the new leadership.

An exceptional player, senior and captain Charlotte Everist has been playing badminton her whole high school career. She started her freshman year as a junior varsity doubles player. Then, throughout her years at high school, she advanced to varsity singles.

Everist’s dedication to badminton shows through her year-round training and priority to keep her springtime open to play badminton. Everist expressed that she owed most of her success to former Edina coach, Summer Mao, her private coach during the summer.

Not only does hard work help Everist succeed, but support from her friends and family can add to their success. “My family is super supportive, they come to every single match and they always have badminton t-shirts, hats, and jackets. They love it!” Everist said.

Everist has also received a lot of support from her teammates as she has taken on her new role as a team captain. “It’s really exciting, I get to know all the girls on exhibition, junior varsity and varsity. It’s a lot of work and a lot of responsibility but it’s also really cool,” Everist said.

As this is Everist’s final year playing badminton at EHS, it is not surprising that she has experienced numerous ups and downs throughout the years. Her biggest accomplishment in badminton was “being a starting varsity singles player as a sophomore. I had to work really hard and I think that was one of my proudest moments on the team,” Everist said.

However, these accomplishments are accompanied by struggles, “I think the competitions sometimes, you can get a little too intense. There’s been a couple of times I’ve hurt myself playing and just kept playing through it. It is easy to get caught up in wanting to win too much that you don’t enjoy it enough,” Everist said. This feeling can be an internal struggle in athletes. This can cause problems for the player, their teammates, and their opponents.

Although the sport can be intense, badminton has also become a positive environment for Everist. When asked why she continued playing badminton, Everist said, “I like to play badminton because it’s a sport that I was pretty good at naturally and the team is really accepting and positive.”

In addition to her own enjoyment of the sport, teammates have appreciated Everist’s efforts in leadership which have overall enhanced players’ experiences. Sophomore and exhibition player Layla Hussein expresses her admiration for Everist, “She’s a fantastic leader and always strives to help everyone do the best they can.”

As the season comes to an end, the team will be looking for new players next year. Everist encourages girls to join the team even if they are nervous. “I think it’s so cool that badminton is being really featured this year and that we’re getting so many girls because sometimes it’s overlooked as a sport so I think that everyone should give it a shot,” Everist said.