Athlete(s) of the month: Carl and Adam Berghult 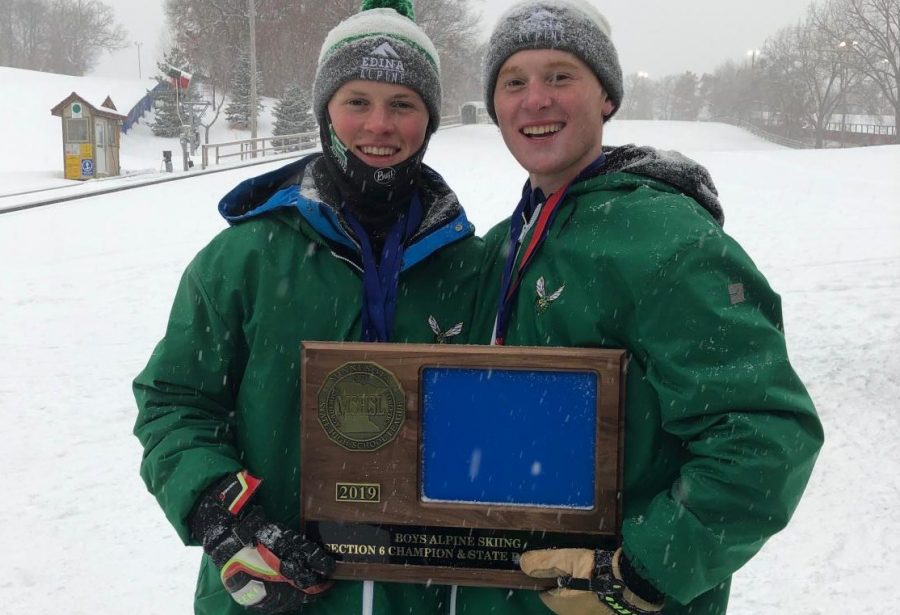 From being a widely watched professional sport to being a popular pastime for Minnesotans of all ages, it isn’t surprising that alpine skiing has emerged as a prominent high school winter sport. Alpine skiing—also known as downhill skiing—is a sport that requires physical and mental stamina under sometimes extreme weather. Edina Alpine Skiing has earned numerous MSHSL State Championships, and at this seasons’ meets, captain and senior Carl Berghult and freshman Adam Berghult have consistently placed in the top five, even placing first and second individually at one of this years’ meets at Buck Hill. The Alpine team won sections and qualified for state: Adam won as an individual and Carl placed second. At the State competition, the Boys’ team took first place, with both Berghults placing within the top twenty competitors.

The Berghult brothers’ success is the result of dedication, as both athletes have been skiing for a considerable amount of time; the brothers have over ten years of experience. “I have always loved to ski and I got into racing as a kid and I liked it,” Carl said.

For having skied for so long, their motivation to pursue the rigorous sport has been crucial. “The competitive part of [skiing]—just always wanting to win—motivates me,” Adam said.

Additionally, both skiers participate competitively outside of the high school season by skiing with the Buck Hill Ski Team, another influential factor in their success. Through constant preparation year-round, it is easier for some athletes to reach success during the season, and exposes them to a greater range of opportunities and athletes. “The people that I have been surrounded by and the good skiers have always pushed me,” Carl said.

Nevertheless, Alpine skiing is a demanding sport that has caused Carl and Adam to face inevitable hardships during the high school season. “It’s tough to not be at school a lot,” Adam said. Missing school is a problem with most sports because students usually have to leave early for practices and competitions, so they are unable to finish schoolwork and miss out on the curriculum. “Just the fact that it is a sport with very fine lines and [that] everything can go wrong with one small mistake is challenging,” Carl said.

Carl and Adam’s experience is unique, as the dynamic of Alpine skiing is much different with a sibling on the team. “It’s always cool to have another person to cheer on and it’s cool to see someone else succeed,” Carl said. “[Carl] motivates me to always try to beat him, and it’s always fun to have someone look up to,” Adam said.